The interactions of water with microscopic defects in porous rock continues to be a long standing challenge in the studying of corresponding emitted acoustic signals. Although different physical aspects of these microscopic events, driven or influenced by water, have been extensively discussed in atomic scale calculations, they have yet to be matched by calibrations or testing on laboratory scale experimentation. For the first time we present new data and analysis of the emitted signals generated during dynamic rock deformation experiments on samples with a well characterised defects. We find that the onset of secondary instability – known as hybrid events –occurs in during a fast healing phase of micro cracking. This leads to a localised and rapid increase of pore water pressure in the damage/process zone, inducing a secondary instability, which is then followed by a fast-locking regime of the microscopic faults (i.e., pulse-like rupture). Furthermore, we show that wet-crackling noise could reveal symmetric to right-handed asymmetry signatures; a distinguished feature from dry-micro defects. Our findings elucidate of the role of water in enhancing the ability of fracture and rupture formation by weakening atomic bonds prior to the main weakening regime, and consequently how ruptures then spread throughout the micro-fault before the fast detachment front (i.e., main fast-slip regime). 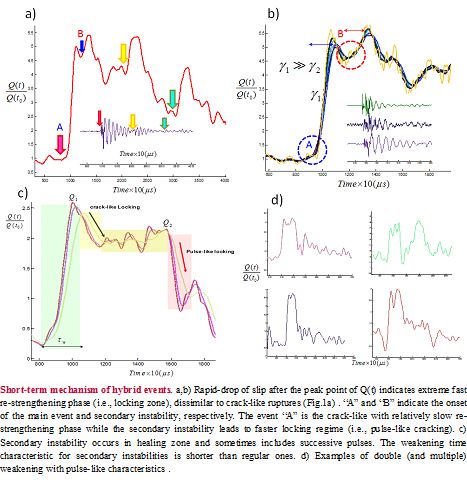