OS11C-05:
Short- and Long-Term Dynamics of Gas Hydrate at GC600: A Gulf of Mexico Hydrocarbon Seep

The GC600 hydrocarbon seep is located at 1200 m in the northern Gulf of Mexico (GOM). Satellite data show it to be one of the most prolific sources of natural oil slicks in the entire GOM. We mapped its seafloor oil and gas vents with 3-D seismic, swath-bathymetry acoustics and submersible observations, documenting gas hydrate deposits, brine pools, benthic fauna, and authigenic carbonates. Geophysical profiles show subbottom locations of salt bodies and migration conduits. We deployed time-lapse imaging systems focused on individual vents to quantify release rates. Oil and gas flow upward along the flanks of an allochthonous salt body from source rocks at 10,000 m and migrate to the seafloor from faults emanating from the salt. Venting to the water column and surface consists of oily bubbles and occurs in two fields separated by ~1 km. The NW vent field (Megaplume) appears to be a more recent expression and hosts about three highly active vents; while the SE vent field (Birthday Candles) hosts more than 10 vents that are generally slower. We measured discharge rates of 2.6 cm3 s-1 and Megaplume and 0.09 cm3 s-1 at Birthday Candles. Although surface deposits of gas hydrate were evident at both vent fields, the Birthday Candles area featured dozens of conical mounds formed by gas hydrate that were dark brown due to large amounts of liquid oil perfused throughout the deposits. Large brine pools indicated gas hydrate formation at the seafloor. Venting occurred in horizontal fissures on the mounds, in which oil and hydrate combined to form short-lived chimneys and balloon-like structures. Ice worms (Hesiocaeca methanicola) were extremely abundant in burrows extending from the sediment into the gas hydrate. Proceeding farther to the SE, venting is reduced and absent, but surface carbonate deposits suggest relict gas hydrate mounds. We propose that the NW to SE trend at GC600 encompasses the progressive development of a biogeochemical filter that sequesters and mineralizes a very substantial portion of the source hydrocarbon prior to discharge into the water column. 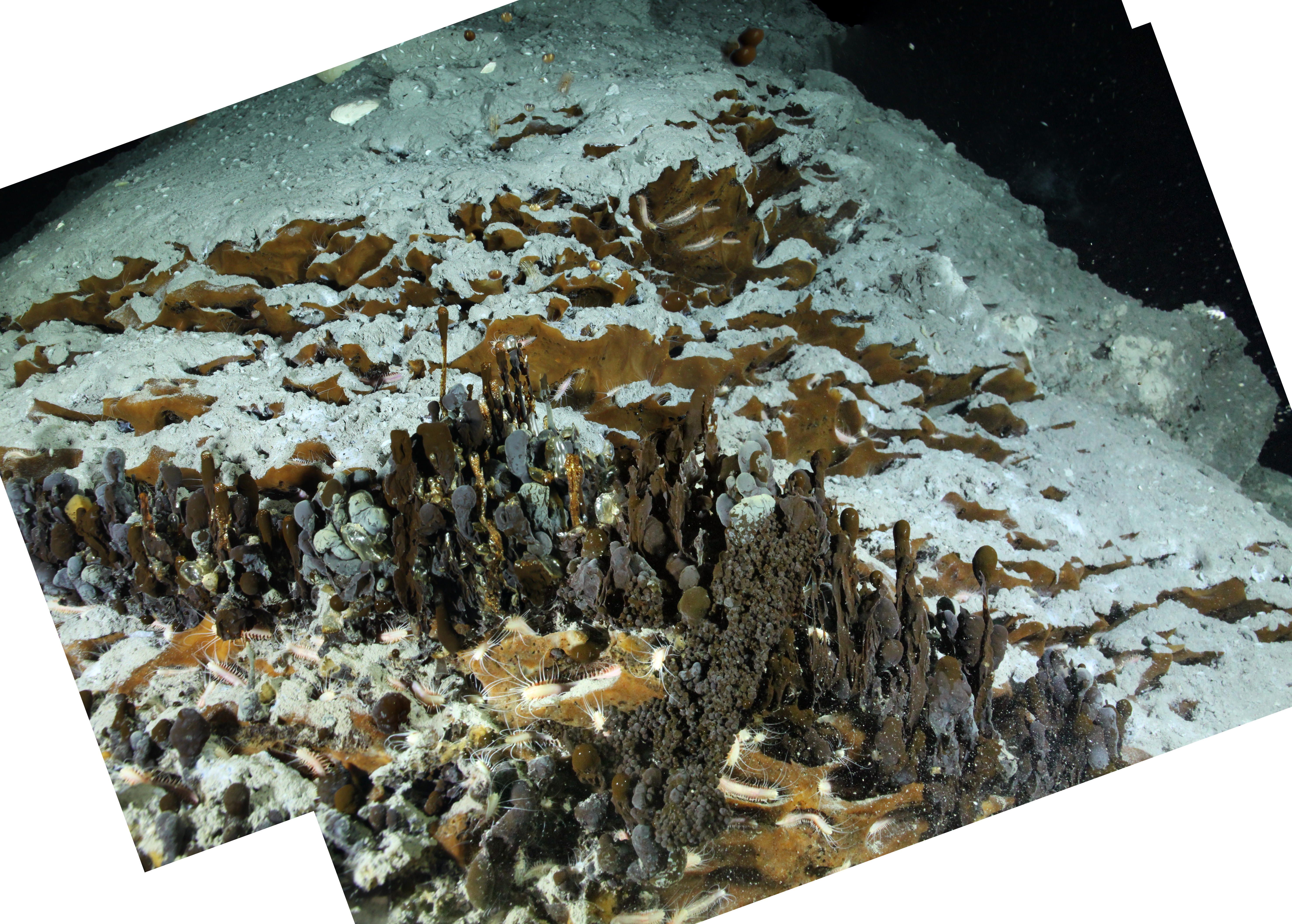