Rheological properties of the lower mantle are critical in controlling the dynamics of the Earth, but quantitative deformation experiments under the lower mantle conditions are challenging. We present the results of synchrotron in-situ deformation experiments of bridgmanite (Mg,Fe)SiO3 + ferropericlase (Mg,Fe)O aggregates using RDA (rotational Drickamer apparatus) under the shallow lower mantle conditions. Some modifications to the cell assembly have been made that allow us to conduct large strain deformation experiments under lower mantle conditions. Pressure and temperature in the sample were estimated using the equation of states of bridgmanite and ferropericlase (26-27 GPa and 2100-2200 K). Stress and strain were measured in-situ by X-ray diffraction and radiography respectively at the Brookhaven NSLS synchrotron beamline. Experiments were conducted for strains of γ=0.5 and 1. The shear stresses were estimated to be of about 3.5±0.7 GPa for bridgmanite and 0.5±0.9 GPa for ferropericlase indicating a large strength contrast between these two phases. An SEM micrograph of deformed sample (Fig.1) shows that both bridgmanite and ferropericlase have undergone substantial flattening, but flattening seems to be larger for ferropericlase than for bridgmanite. The large rheological contrast between these phases will promote shear localization in the lower mantle. Interestingly, substantial grain-growth was observed only in the outer regions of the sample possibly caused by strain-induced grain coarsening. If confirmed this would imply the operation of superplastic deformation under these conditions. Deformation-induced grain-growth and strain partitioning will compete in controlling the nature of shear localization. 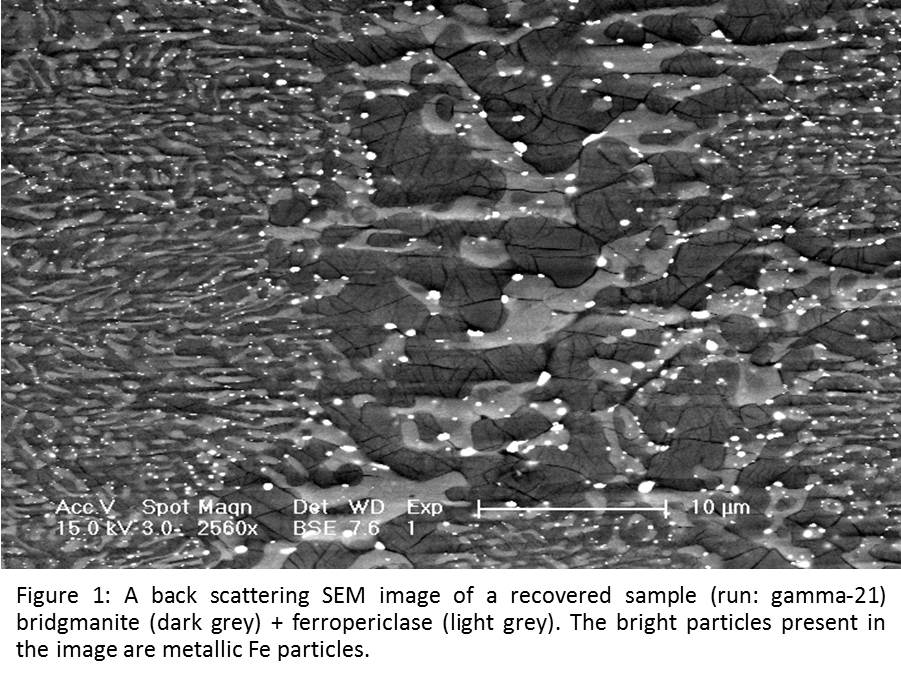