B11G-0112:
CONJOINT SEASONAL AND INTRASEASONAL DYNAMICS OF PRECIPITATION AND NDVI OVER THE AMAZON AND THE CONGO RAINFORESTS

We study the conjoint seasonal and intraseasonal variability of precipitation and NDVI over the Amazon and the Congo rainforests, using pentad precipitation from the Tropical Rainfall Measuring Mission (TRMM; 0.25°x0.25°; from 1998 to 2010), as well as from the CPC Merged Analysis of Precipitation (CMAP; 2.5°x2.5°; from 1979 to 2011). NDVI is obtained from NASA (DAAC-EOSDIS) (0.25°x0.25°, from 2000 to 2010). Results for Amazonia show a uni-modal out-phased seasonal cycle of precipitation and NDVI, whereas bi-modal and in-phase over the Congo (Figure 1). Dry months over Amazonia (August-September) correspond with lagged maximum NDVI values in June-July-August (Western-Central-Eastern) and with the second wet season over the Congo, whereas wet-season months over Amazonia (March-April) coincide with the lowest NDVI values, as well as with the first wet season and maximum NDVI over the Congo.

A (tropical) transatlantic Empirical Orthogonal Functions (EOF) analysis of pentad precipitation (20-100 day filtered) indicates that EOF No. 1 (52% of variance; Fig. 2a) exhibits a meridional dipole with higher positive loadings over the tropical North Atlantic (5°N-10°N), and higher negative loadings from 5°N to the equator over the Atlantic, and to 15°S over the continents. The Principal Component No. 1 exhibits a predominant 37-day frequency. EOF No. 2 (18% of variance; Fig.2b) exhibits a tripole pattern with positive loadings over southern Amazonia, the tropical North Atlantic, and (south) equatorial Africa, and a transatlantic pattern of negative loadings from 0 to 5°N including both continents, with a 38-day periodicity. EOF No. 3 (8% of variance; Fig. 2c) exhibits a tripole between the Amazon, the Atlantic Ocean and the Congo, with a 19-day frequency. EOF No. 4 (5%; Fig. 2d) shows a dipole between the Amazon and Congo rainforests, with a predominant period of 20 days. The apparent west-to-east patterns identified in the principal EOFs could be associated with the predominant movement of the intraseasonal Madden-Julian Oscillation (MJO) and Kelvin waves, whereas EOFs No. 3 and 4 denote modes associated to sub-monthly variability. 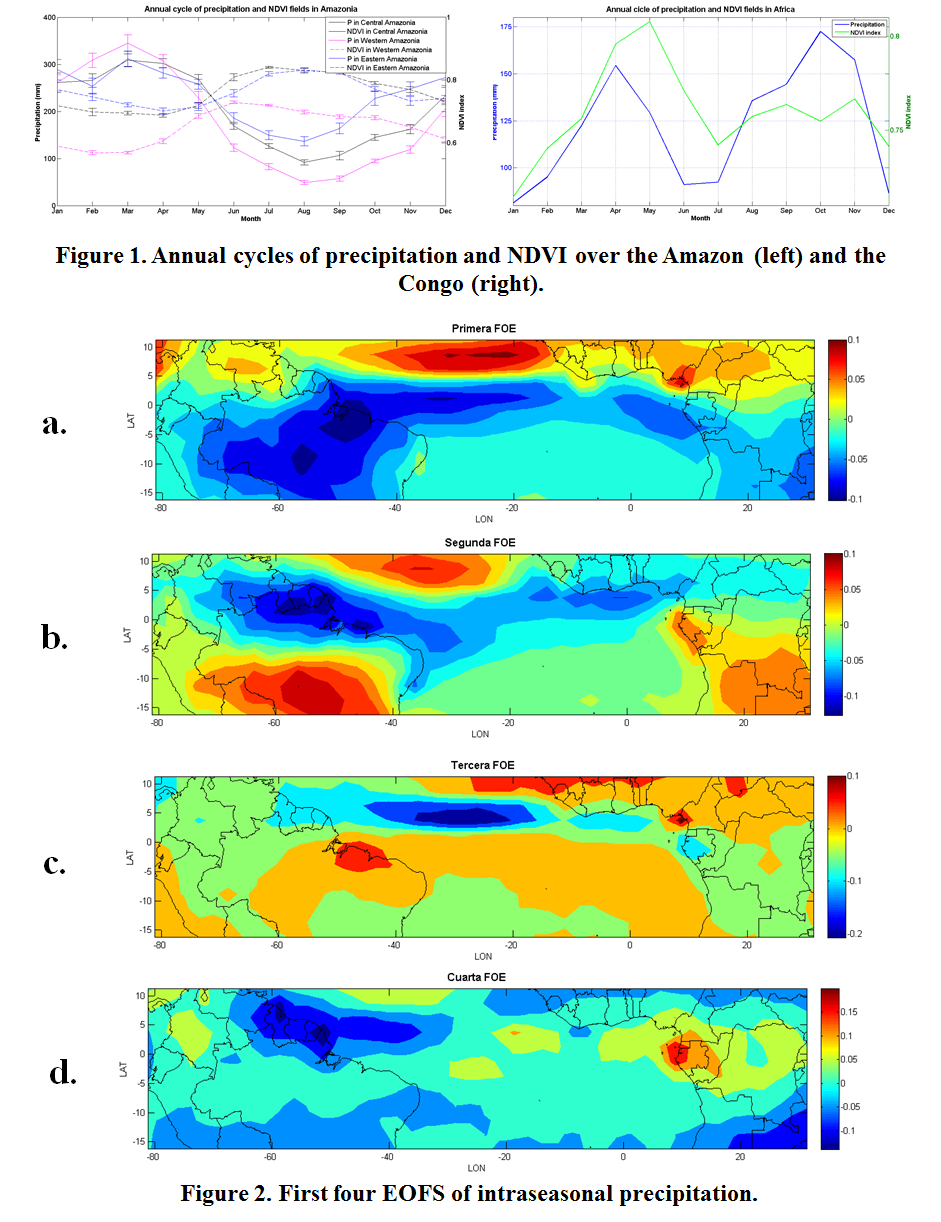