P13A-3801:
Plasma Speeds Upstream of Saturn and in the Magnetosphere as Measured by Cassini's Magnetospheric Imaging Instrument (MIMI)

Knowledge of plasma speeds inside Saturn's magnetosphere and in the upstream solar wind is important for developing a complete picture of magnetospheric processes at Saturn. Therefore we have developed techniques for extracting plasma speeds from these environments using data from the Magnetospheric Imaging Instrument (MIMI) on Cassini. The Cassini Plasma Spectrometer (CAPS) also measures the plasma speed and other properties, and we rely on CAPS results to validate our approach. However, there are some intervals during which MIMI is oriented more favorably in terms of detecting ambient plasma flows. Furthermore, CAPS operations have ceased, and MIMI provides an alternative way to measure plasma characteristics. In the solar wind, the plasma speed can be determined directly from MIMI's Charge-Energy-Mass Spectrometer (CHEMS) using the easily observable cutoff in He+ pickup ion (PUI) spectra, because there is a well-known relationship between this PUI cutoff and the ambient solar wind speed. PUIs are distributed over a wide angular extent, and thus CHEMS can obtain solar wind speeds at times when CAPS does not see the direct solar wind ions. We present solar wind speeds derived in this way from 2001 to 2004, a period that includes most of the interplanetary cruise preceding the mid-2004 Saturn orbit insertion (SOI) and the long post-SOI loop back into the solar wind. These values show good agreement with CAPS measurements available during the same interval and with a solar wind propagation model. Inside Saturn's magnetosphere, we are using a combination of data from CHEMS and MIMI's Ion and Neutral Camera (INCA) to derive speeds based on anisotropies. CAPS measurements in the magnetosphere are used to validate the MIMI-based speeds, but it is also possible to use our technique for periods when CAPS cannot be used to measure plasma velocities directly. We will present initial results of magnetospheric speeds from 2004 to the present. 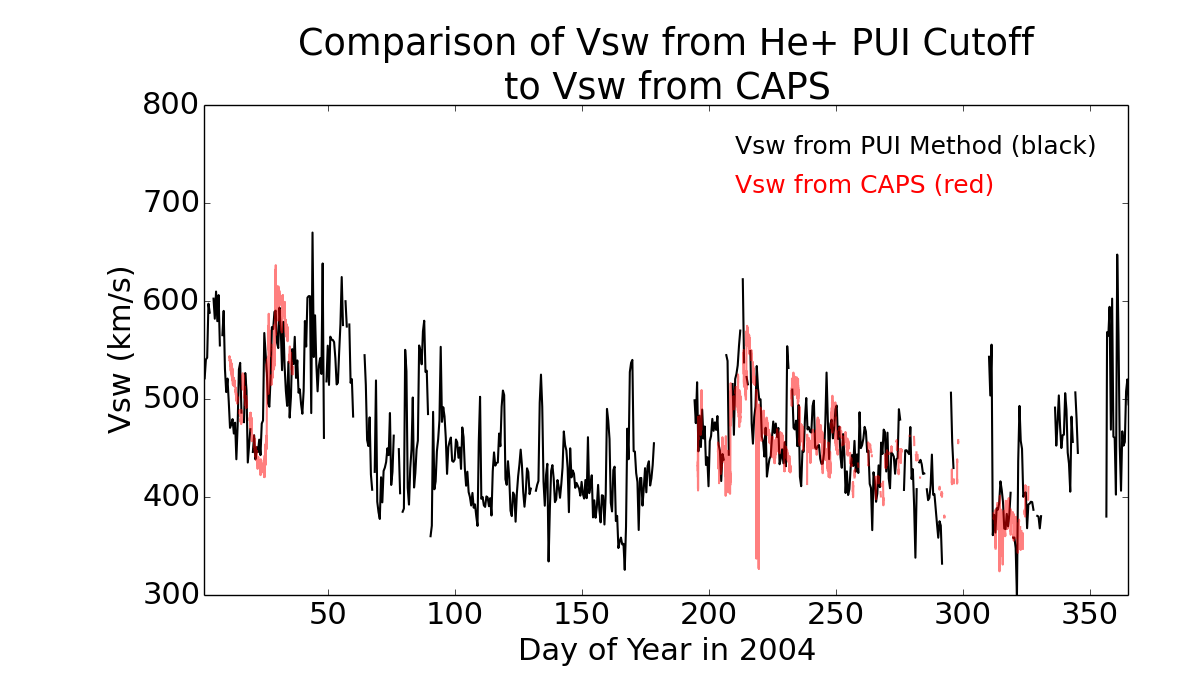