Interferometric synthetic aperture radar (InSAR) and continuous GPS observations at the summit of Kīlauea Volcano, Hawaiʻi, show spatially and temporally transient surface displacements in the months and weeks before the 5-9 March 2011 Kamoamoa fissure eruption. Interferograms computed from the Italian Space Agency’s COSMO-SkyMed satellites and the German Aerospace Center’s TerraSAR-X satellite show a distinctive triangular pattern of surface deformation that extends to the SE of Kīlauea Caldera starting approximately one month prior to the Kamoamoa eruption. GPS and electronic tilt meter time series for sites in the vicinity of this deformation show that this inflation transient is superimposed on the longer (~4-6 month) summit inflation. We examine and model the spatiotemporal evolution of the summit deformation. InSAR data from ascending and descending tracks are used to constrain models of the transient. To achieve low-levels of atmospheric phase noise required interferograms spanning four months prior to the eruption, thus involving multiple sources within the summit region (see figure). To solve for model parameters we use a Markov Chain Monte Carlo optimization approach. First, we model the co-eruption summit deflation to isolate the intra-caldera sources, consisting of a steeply dipping tensile dislocation (D) beneath the western edge of the caldera and a sub-horizontal, NE trending spheroidal pressure source (Y) in the center of the caldera at 1.5 km depth. We use these sources as starting models for the pre-eruption transient, which requires the addition of a sill (S) to explain the deformation that extends to the SE of the caldera. In a third step we add a simplified model for Kīlauea’s rifts and basal detachment system to explain the coupled summit and south flank motion. Modeled at over 3 km beneath the surface, the transient sill source inflates over the month before the eruption and deflates during the four-day eruption. The sill runs parallel to and to the west of upper East Rift Zone (ERZ) seismicity, considered to delineate the primary magma conduit to the ERZ at 3 km depth. The deflation of the sill during the eruption fits with the current standard model for Kīlauea: response to the overall depressurization of the summit and ERZ conduit system due to the Kamoamoa dike intrusion and eruption. 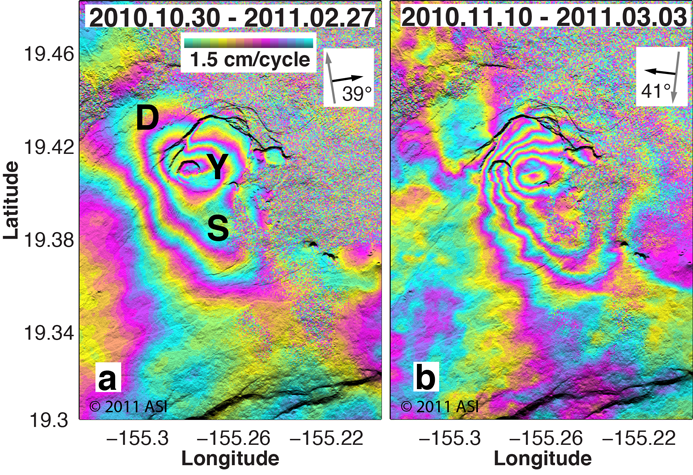