The origin of various patterns seen in Galápagos magmatism is investigated using numerical simulations of a mantle plume interacting with the Galapágos Spreading Center (GSC) as its position and geometry evolved over the past 6 Myr. Models predict magma generation and composition from a mantle composed of fusible veins of material enriched in incompatible elements imbedded in a more refractory depleted matrix. Model 1 simulates a low-viscosity plume owing to a temperature-dependent mantle rheology; Model 2 includes the added dependence on water content, which leads to high-viscosities in the dehydrated, shallow upper mantle. Model 1 produces the most favorable results. It shows how a modest crustal thickness anomaly observed along the Western GSC can arise from a plume with large excess temperatures (>100˚C). Model 1 also predicts geographic patterns in magma isotopic compositions generally resembling those observed along the GSC as well as around the Galapágos Archipelago. These patterns are predicted to arise out of the differences in melting depths between the enriched veins and depleted matrix, coupled with spatial variations in the rate of mantle upwelling and decompression melting. The results provide an alternative to traditional explanations involving the plume mixing with or entraining the ambient mantle. The models are still missing some essential factors as indicated by the predicted increases, rather than the observed decrease in incompatible element concentration away from the hotspot along the GSC. Possible factors include a regional-scale zoning in incompatible element and/or water content within the plume, or melt migration that delivers a larger flux of incompatible-element-rich melts to the GSC.

This study will be published as one of 18 chapters in The Galapagos: A Natural Laboratory for Earth Sciences, edited by K. Harpp, E. Mittlestaedt, N. d’Ozouville, and D. W. Graham, Geophys. Monogr. 204. AGU & J. Wiley, 2014. 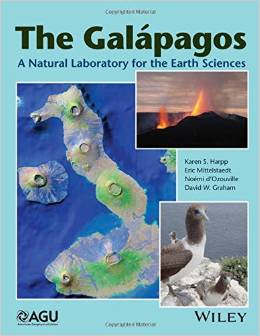