The West Kaibab Fault Zone (WKFZ) is the westernmost bounding structure of the Kaibab Plateau of northern Arizona. The WKFZ is a branching complex of high angle, normal faults downthrown to the west. There are three main faults within the WKFZ, the Big Springs fault with a maximum of 165 m offset, the Muav fault with 350 m of displacement, and the North Road fault having a maximum throw of approximately 90 m. Mapping of geologically recent surface deposits at or crossing the fault contacts indicates that the faults are likely Quaternary with the most recent offsets occurring <1.6 Ma. Slip rates are estimated to be less than 0.2 mm/yr. No historic fault slip has been documented. The WKFZ is one of the most seismically active areas in Arizona and lies within the Northern Arizona Seismic Belt (NASB), which stretches across northern Arizona trending NW-SE. The data set for this study includes 156 well documented events with the largest being a M5.75 in 1959 and including a swarm of seven earthquakes in 2012. The seismic data set (1934-2014) reveals that seismic activity clusters in two regions within the study area, the Fredonia cluster located in the NW corner of the study area and the Kaibab cluster located in the south central portion of the study area. The fault plane solutions to date indicate NE-SW to EW extension is occurring in the study area. Source relationships between earthquakes and faults within the WKFZ have not previously been studied in detail. The goal of this study is to use the seismic data set, the available data on faults, and the regional physiography to search for source relationships for the seismicity. Analysis includes source parameters of the earthquake data (location, depth, and fault plane solutions), and comparison of this output to the known faults and areal physiographic framework to indicate any active faults of the WKFZ, or suggested active unmapped faults. This research contributes to a better understanding of the present nature of the WKFZ and the NASB as well. 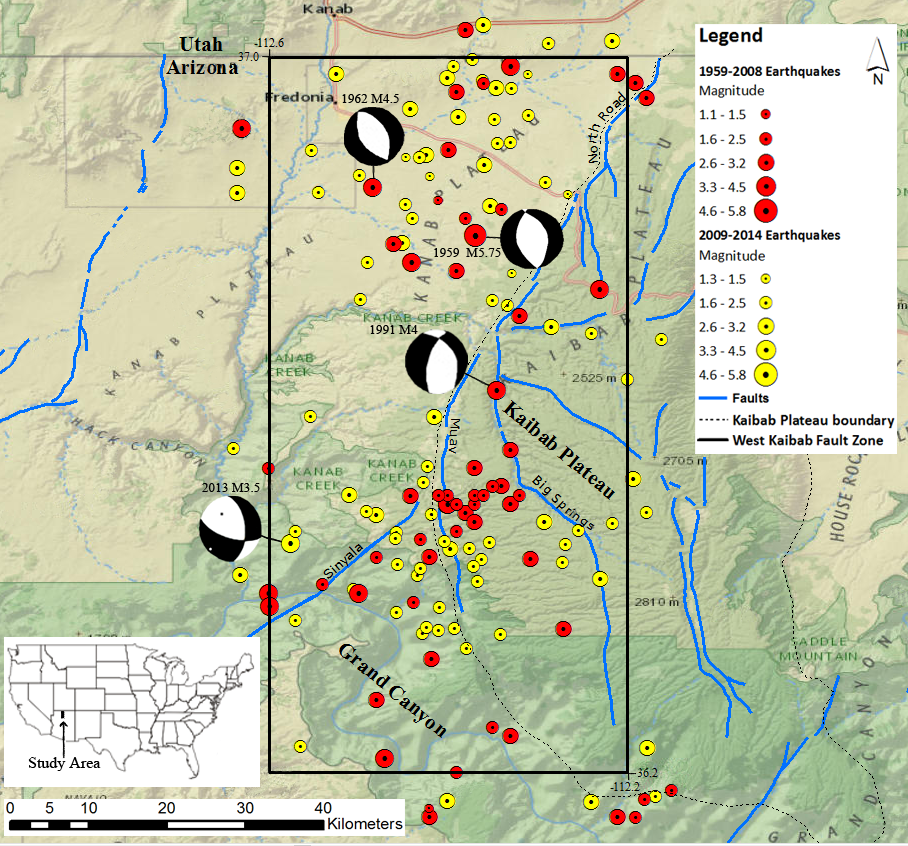