Ground- and aircraft-based measurements show that the seasonal amplitude of Northern Hemisphere atmospheric carbon dioxide (CO2) concentrations has increased by as much as 50% over the last 50 years. This increase has been linked to changes in Temperate, Boreal and Arctic ecosystem properties and processes such as enhanced photosynthesis, increased heterotrophic respiration, and expansion of woody vegetation. However, the precise causal mechanisms behind observed changes in atmospheric CO2 seasonality remain unclear. Here we show that increases in agricultural productivity, which have been largely overlooked in previous investigations, explain as much as 25% of observed changes in atmospheric CO2 seasonality, and perhaps more. Specifically, Northern Hemisphere extratropical maize, wheat, rice, and soybean production grew by 240% between 1961-2008, thereby increasing the amount of net carbon uptake by croplands during the Northern Hemisphere growing season by 0.33 Pg. Maize alone accounts for two-thirds of this change, owing mostly to agricultural intensification within concentrated production zones in the Midwestern United States and Northern China. Since a substantial portion of seasonality enhancement results from a process that is roughly neutral in terms of its impact on the terrestrial carbon sink, our results show that care must be taken when making inferences regarding the linkages between CO2 seasonality and terrestrial carbon sink dynamics. More generally, these results demonstrate how intensive management of agricultural ecosystems over the last five decades have imparted a substantial and direct fingerprint of anthropogenic activities on seasonal patterns of Northern Hemisphere atmospheric CO2. 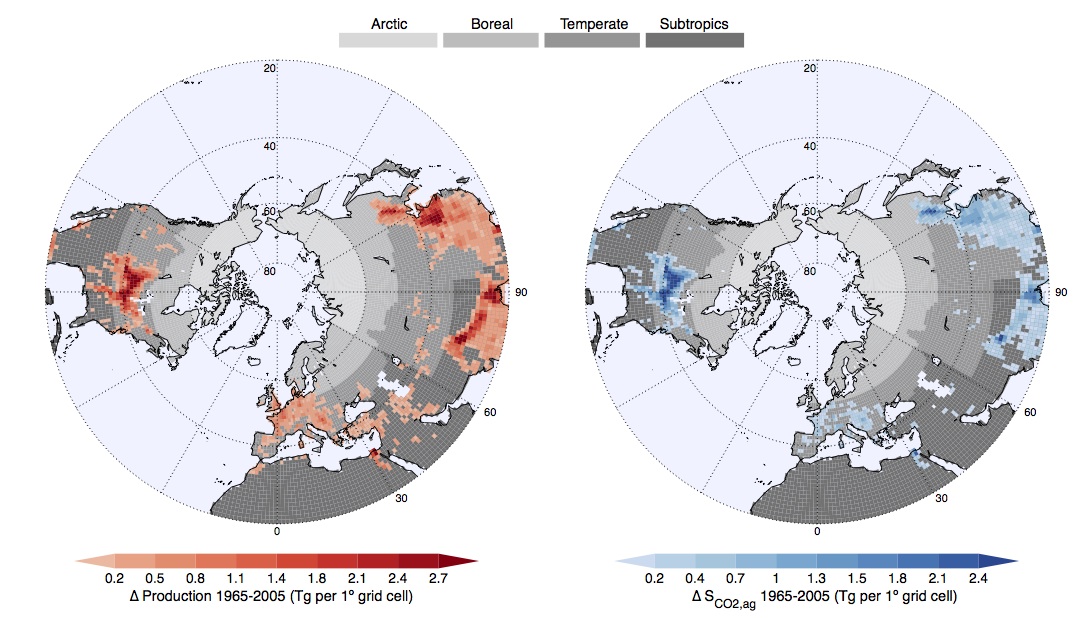