The Burma Arc is the northward continuation of the Sumatra-Anadaman subduction zone that gave rise to the 2004 M9.3 earthquake and tsunami. Near its northern end, it is colliding with the thick sediments of the Bengal Basin. The sediments of the Ganges-Brahmaputra Delta are folded and faulted, creating a subaerial 250-km wide accretionary prism. The deformation front is blind and reaches ½ way across the delta. Whether subduction is still occurring at this highly oblique plate boundary has been hotly debated. To investigate this, we combined our 25 continuous GPS receivers in Bangladesh with the campaign network in Myanmar, processing them together with GAMIT/GLOBK. We combined this data with 28 mostly campaign GPS sites in India (Gahalaut et al., 2012) by processing using the same IGS sites and performing a Helmert transformation to place all the data in same reference frame within ITRF2008. Published Indian plate poles yield a systematic residual for Bangladeshi sites believed to be on stable India. We estimated a new pole by combining 13 Indian stations (Mahesh et al., 2013) with 2 of our stations. Due to the rapid growth of the accretionary prism and the overthrusting by the Shillong Plateau, the Burma Arc changes shape from the backstop to the front folds. To project the GPS velocities into a profile, we have experimented with several projections that vary across the foldbelt, using the arc of the earthquakes and the topography as a guide. Strike-slip is mostly absorbed by the Sagaing and CMF faults, and some additional shear is distributed over the region. The best fitting suite of models for the shortening component yield 13-15 mm/y of shortening across the arc on a shallow-dipping megathrust. Additional shortening of ~4 mm/y is absorbed in the vicinity of the Kabaw Fault, where coverage is sparse. The dip of the megathrust and the depth of its downdip end trade off with one another in the different projections. The low range of dips of 6-10° is consistent with local intraplate seismicity. The downdip end of the locked zone of the megathrust is just east of Bangladesh-India border around ~92.5°E and is a very stable feature in all the models. The broad locked zone of ~250km suggests that the segment between Shillong and the coast, which has no historical record of a large earthquake, is capable of a M8.2-M8.8 earthquake. 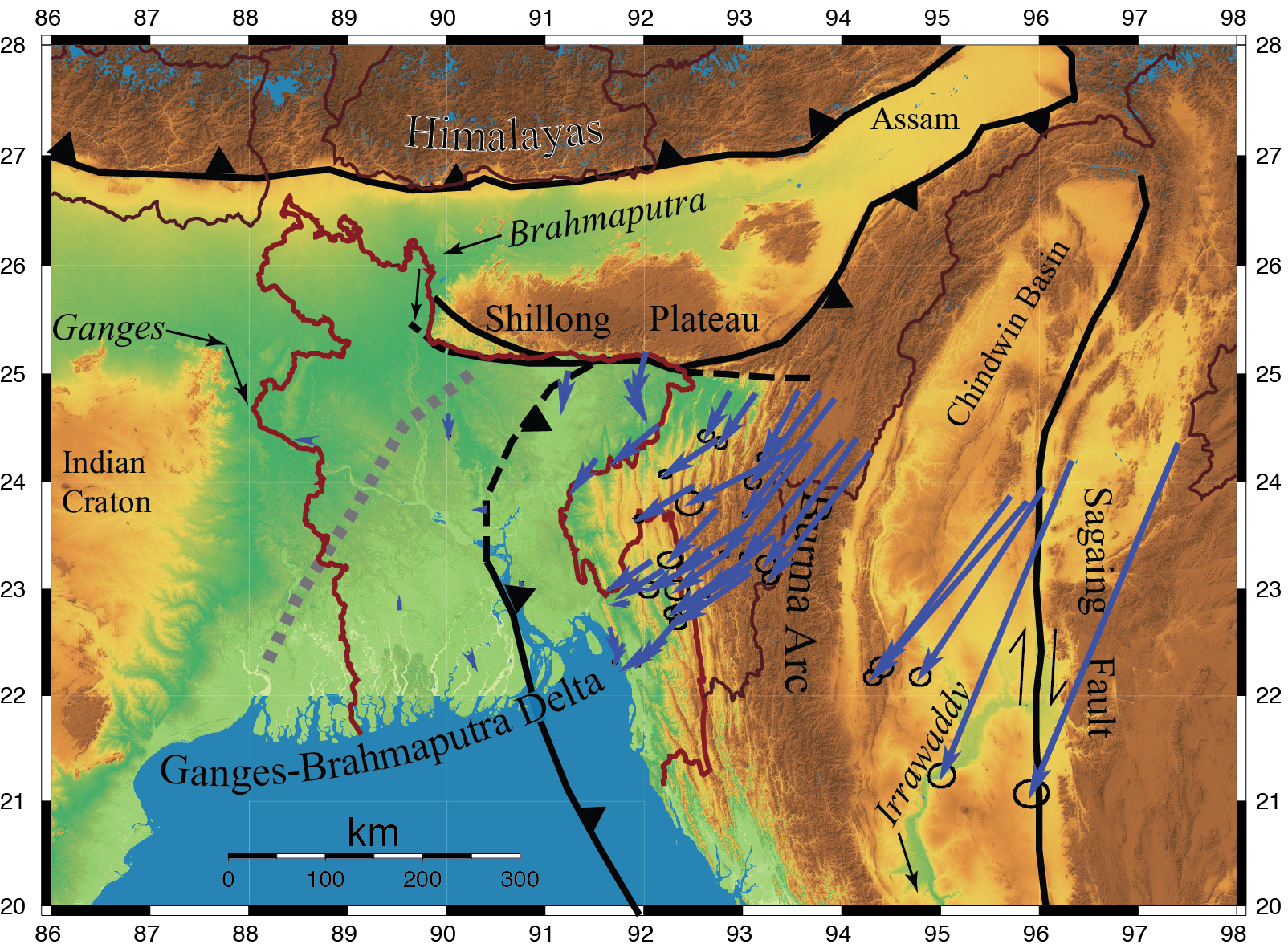