Mud logging, a tool in riser drilling, makes use of the essentially “closed-circuit” drilling mud flow between the drilling platform downhole to the bit and then back to the platform for analyses of gas from the formation in the drilling mud, cuttings from downhole, and a range of safety and operational parameters to monitor downhole drilling conditions. Scientific riser drilling, with coincident control over drilling mud, downhole pressure, and returning drilling mud analyses, has now been in use aboard the scientific riser drilling vessel Chikyu since 2009. International Ocean Discovery Program (IODP) Expedition 348, as part of the goal of reaching the plate boundary fault system near ~5000 mbsf, has now extended the deep riser hole (Hole C0002 N & P) to 3058.5 mbsf.

The mud gas data discussed here are from two approximately parallel boreholes, one a kick-off from the other; 860-2329 mbsf (Hole C0002N) and 2163-3058 mbsf (Hole C0002P). An approximate overlap of 166 m between the holes allows for some slight depth comparison between the two holes. An additional 55 m overlap at the top of Hole C0002P exists where a 10-5/8-inch hole was cored, and then opened to 12-1/4-inch with logging while drilling (LWD) tools (Fig. 1). There are several fault zones revealed by LWD data, confirmed in one instance by coring. One of the defining formation characteristics of Holes C0002 N/P are the strongly dipping bedding planes, typically exceeding 60º. These fault zones and bedding planes can influence the methane/ethane concentrations found in the returning drilling mud.

A focused comparison of free gas in drilling mud between one interval in Hole C0002 P, drilled first with a 10 5/8-inch coring bit and again with an 12 ¼-inch logging while drilling (LWD) bit is shown. Hole C0002N above this was cased all the way from the sea floor to the kick-off section. A fault interval (in pink) was identified from the recovered core section and from LWD resistivity and gamma. The plot of methane and ethane free gas (C1 and C2; ppmv) shows that the yield of free gas (primarily methane) was greater when the LWD bit returned to open the cored hole to a greater diameter. One possible explanation for this is the time delay between coring and LWD operations; approximately 3 days passed between the end of coring and the beginning of LWD (25-28 December 2013). 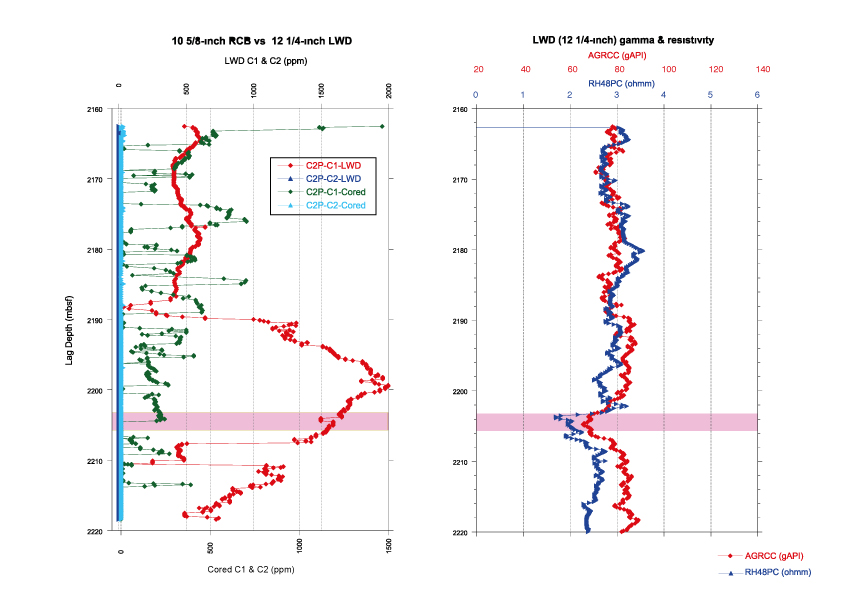