In wind energy applications the turbulent velocity field of the Atmospheric Boundary Layer (ABL) is often characterised by Gaussian probability density functions. When estimating the dynamical loads on wind turbines this has been the rule more than anything else.

From numerous studies in the laboratory, in Direct Numerical Simulations, and from in-situ measurements of the ABL we know, however, that turbulence is not purely Gaussian: the smallest and fastest scales often exhibit extreme behaviour characterised by strong non-Gaussian statistics.

In this contribution we want to investigate whether these non-Gaussian effects are important when determining wind turbine loads, and hence of utmost importance to the design criteria and lifetime of a wind turbine.

We devise a method based on Principal Orthogonal Decomposition where non-Gaussian velocity fields generated by high-resolution pseudo-spectral Large-Eddy Simulation (LES) of the ABL are transformed so that they maintain the exact same second-order statistics including variations of the statistics with height, but are otherwise Gaussian. In that way we can investigate in isolation the question whether it is important for wind turbine loads to include non-Gaussian properties of atmospheric turbulence. As an illustration the Figure show both a non-Gaussian velocity field (left) from our LES, and its transformed Gaussian Counterpart (right). Whereas the horizontal velocity components (top) look close to identical, the vertical components (bottom) are not: the non-Gaussian case is much more fluid-like (like in a sketch by Michelangelo). The question is then: Does the wind turbine see this?

Using the load simulation software HAWC2 with both the non-Gaussian and newly constructed Gaussian fields, respectively, we show that the Fatigue loads and most of the Extreme loads are unaltered when using non-Gaussian velocity fields. The turbine thus acts like a low-pass filter which average out the non-Gaussian behaviour on time scales close to and faster than the revolution time of the turbine. For a few of the Extreme load estimations there is, on the other hand, a tendency that non-Gaussian effects increase the overall dynamical load, and hence can be of importance in wind energy load estimations. 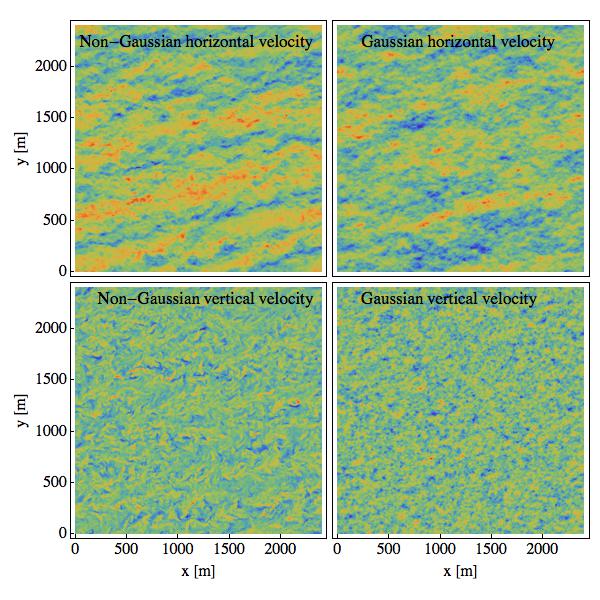