Temperature increase under climate change is expected to affect photosynthesis of tree species. Biochemical models generally suggest that the elevated temperature increases the photosynthetic carbon fixation, however, many opposing results were reported as well. We aimed to examine the photosynthetic responses of four coniferous seedlings to projected future temperature increase, by conducting an open-field warming experiment. Experimental warming set-up using infra-red heater was built in 2011 and the temperature in warming plots has been regulated to be consistently 3oC higher than that of control plots. The seeds of Abies holophylla (AH), A. koreana (AK), Pinus densiflora (PD), and P. koraiensis (PK) were planted in each 1 m × 1 m plot (n=3) in April, 2012. Monthly net photosynthetic rates (Pn; µmol CO2 m-2 s-1) of 1-year-old seedlings (n=9) from June to November, 2013 were measured using CIRAS-2 (PP-Systems, UK) and photosynthetic parameters (the apparent quantum yield; ф; µmol CO2 mol-1, the dark respiration rate; Rd; µmol CO2 mol-1, and the light compensation point; LCP; µmol mol-1 s-1) were also calculated from the light-response curve of photosynthesis in August, 2013. Chlorophyll contents were measured using DMSO extraction method. Monthly Pn was generally higher for PD and decreased for AK in warmed plots than in control plots (Fig. 1). Pn of AK and PK did not show any significant difference, however, Pn of PK in October and November increased by experimental warming. Pn of PD also showed the highest increase in November and this distinct increase of Pn in autumn might be caused by delayed cessation of photosynthesis by temperature elevation. ф and Rd in warmed plots were higher for PD and lower for AK, while LCP did not significantly differ by treatments for all species. Because ф is considered to be related to the efficiency of harvesting and using light, the change in ф might have caused the response of Pn to warming in this study. Decreases in chlorophyll contents resulted from heat stress were observed for PD and PK. We found the species-specific responses of Pn related to the change in photosynthetic parameters following experimental warming of four 1-year-old coniferous seedlings. 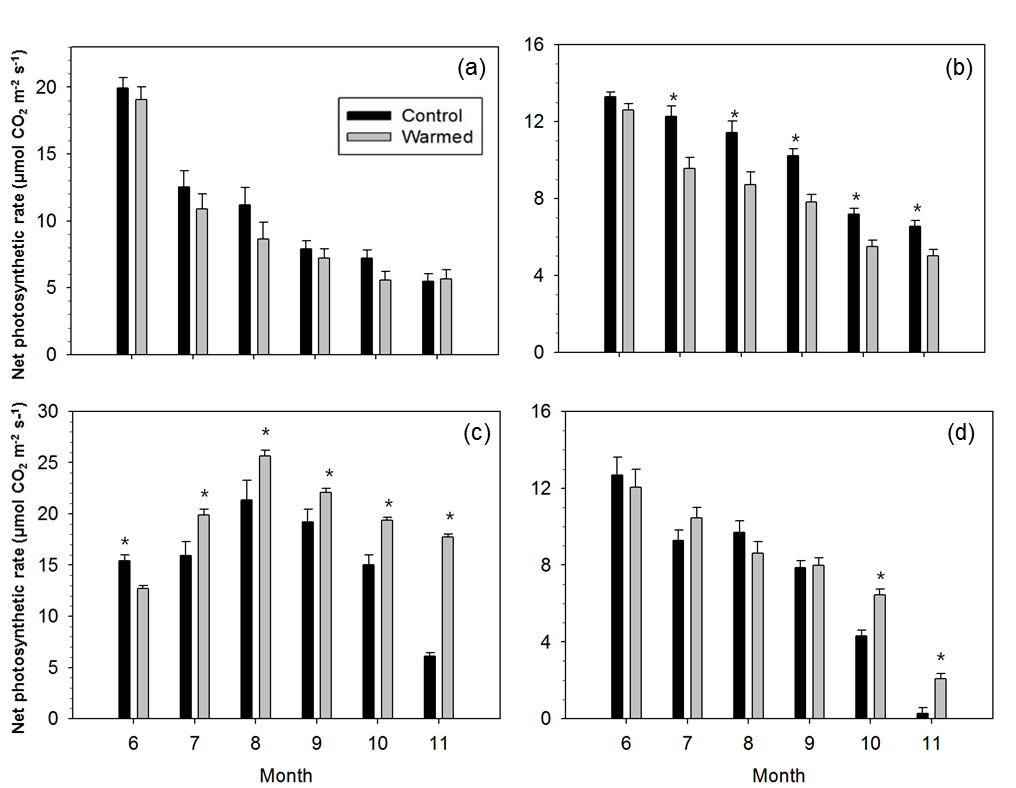