P43D-4012:
Characteristics and Origin of a Cratered Unit near the MSL Bradbury Landing Site (Gale Crater, Mars) Based on Analyses of Surface Data and Orbital Images

Using orbiter images, the Curiosity landing ellipse was mapped as six distinct units based mainly on geomorphic characteristics. These units are the alluvial fan material (ALF), fractured light-toned surface (FLT), cratered plains/surfaces (CS), smooth hummocky plains (SH), rugged unit (RU) and striated light-toned outcrops (SLT) (Grotzinger et al., 2014; DOI: 10.1126/science.1242777). The goal of this project was to characterize and determine the origin of the CS. The CS is a thin, nearly horizontal, erosion resistant capping unit. HiRISE mosaics were utilized to subdivide the CS into four geomorphic sub-units. Crater densities were calculated for each sub-unit to provide a quantifiable parameter that could aid in understanding how the sub-units differ. Mastcam images from many locations along Curiosity's traverse show fields of dark, massive boulders, which are presumably erosional remnants of the CS. This indicates that the CS was likely more laterally extensive in the past. In situ CS outcrops, seen at Shaler and multiple locations near the Zabriskie Plateau, appear to have a rough, wind-sculpted surface and may consist of two distinct lithologies. The lower lithology displays hints of layering that have been enhanced by differential weathering, whereas the upper lithology consists of dark, massive rock. When present, the outcrops can extend laterally for several meters, but Mastcam images of outcrops do not always reveal both sections. ChemCam data show that CS targets have concentrations of Al, Na, and K that are indicative of an alkali feldspar phase. The physical and chemical characteristics of the CS suggest a massive deposit that has seen little to no chemical alteration. Physical characteristics of the CS do not allow us to unambiguously determine its geologic origin; possible emplacement mechanisms would require the ability to spread laterally over a nearly horizontal surface, and include inflating lava (e.g., pāhoehoe) or a distal delta deposit. The Cratered Surface represents an intriguing, complicated portion of the geologic history of Mars at Gale Crater. 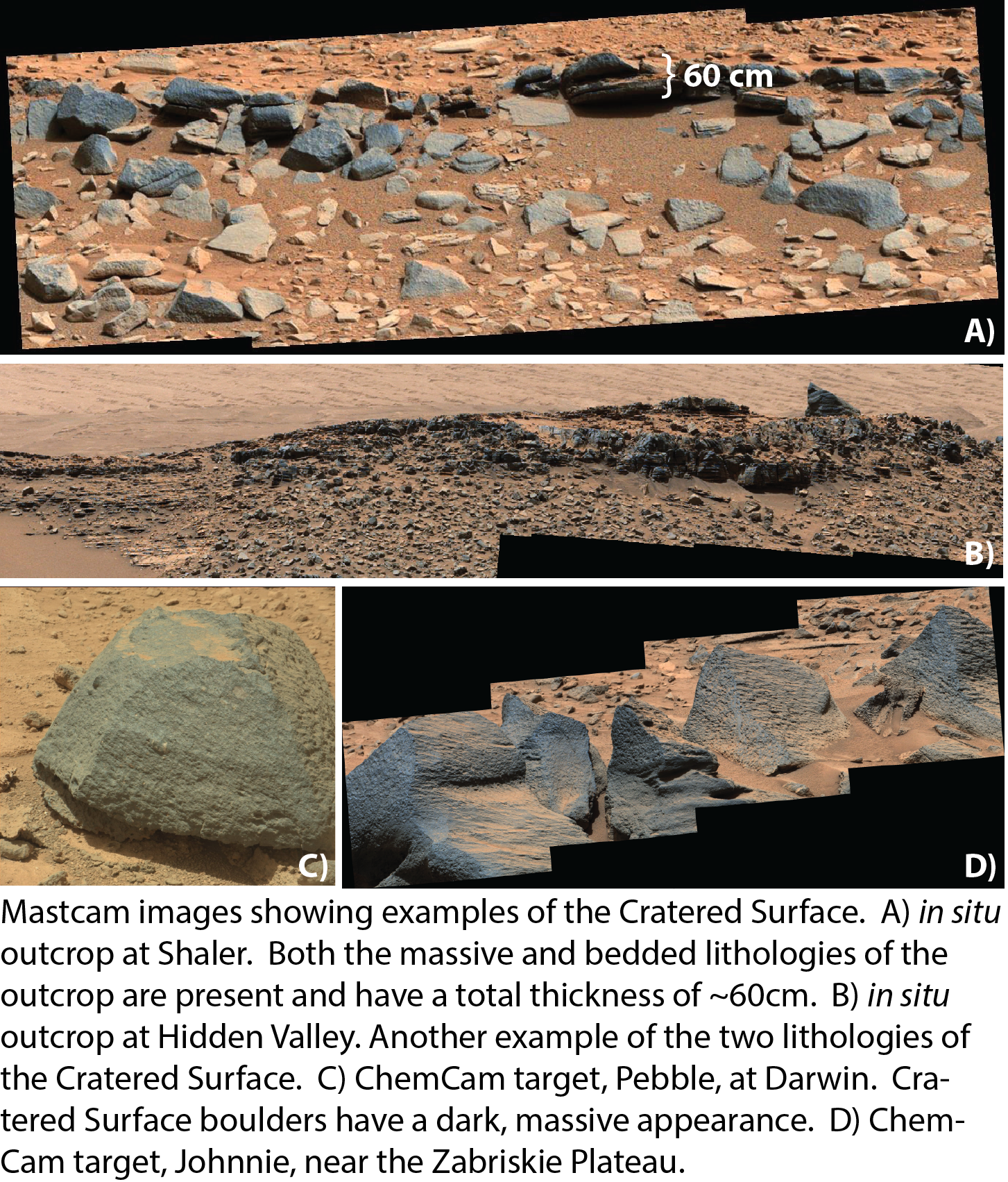