T33C-4711:
A New System of Marginal Arc in the North of the South China Sea of Today

The South China Sea (SCS) of today results from rupturing of the marginal continent of South China. Both its north and west margins are of typical passivity.

Some records mirroring a Cretaceous active margin were reported in the study area. Generally they were attributed to westward subduction from the fossil Pacific plate. With respect of the problem, however, whether the subduction may induce response of an area far from the Pacific margin is an open question.

The present approach has been primitively undertaken with the comparison of magmatic formation between the proto-SCS and the Pacific. The adakitic granite and Mg-rich andesite collected from the southern Hainan Island have their own petrologic and chemical characters as distinct from those igneous rocks from Zhejiang-Fujian province just bordering the western Pacific. Interestingly, the characters displayed in the Hainan are repeated in the Nha Trang-Tuy hoa area, South Vietnam.

According to Tapponier’s model (1986), Indo-China block was SE-ward slid 500-700km along the Red River Fault since the late Eocene. If restoring it, the Nha Trang-Tuy hoa area should be on the line extended westward from the Hainan Island. The above two sites constitute a latitudinal zone representing the active margin of the proto-SCS differing from the Pacific system.

Actually some elements can be concentrated as follows to illustrate the framework in the northern margin of the SCS (fig. 1): (1) the late Jurassic to late Cretaceous volcano-sedimentary sequence drilled from the Chaoshan depression 150 mile off the Pearl River Delta, accumulating in the fore-arc environment, (2) the arc-related granite, diorite and monzodiorite (118-72Ma) drilled from the northern continental shelf, the SCS, (3) the Cretaceous andesite, andesitic basalt, granite, and pyroclastic sediments, afore-said, outcropping both in Hainan and South Vietnam, (4) granite-gneiss (75Ma) drilled in the Xisha foundation of reef platform, which might be the output of SubFac, and (5) the Cretaceous volcano-sedimentary sequences representing back-arc rifting and outcropping in the Nanxiong and Hengyang basins, South China.

The above pattern portrays an active margin characterized by subducting northward to the Asian land and disappearing at the end of the Mesozoic, which should be a part of the Tethyan archipelago. 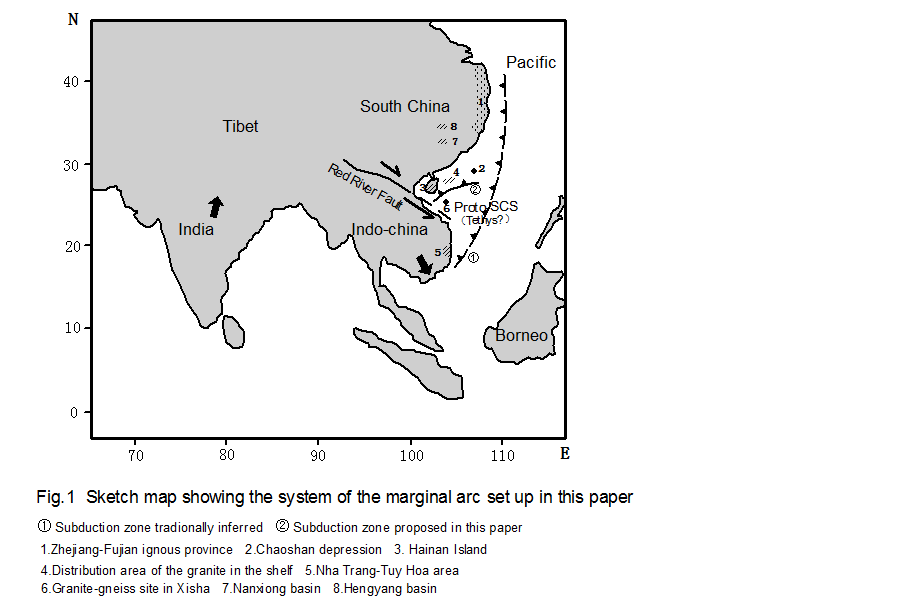