OS51A-0954:
Surface circulation and upwelling patterns around Sri Lanka and formation of the Sri Lanka Dome

Sri Lanka, a relatively large island (length 440 km; width 225 km), occupies a unique location within the equatorial belt in the northern Indian Ocean with the Arabian Sea on its western side and the Bay of Bengal on its eastern side and experiences bi-annually reversing monsoon winds. This allows for the Island to interact with the seasonally reversing monsoon currents leading to the the island mass effect and enhanced primary production. We will present elements of the dynamics of the surface circulation and coastal upwelling in the waters around Sri Lanka using satellite imagery and numerical simulations using the Regional Ocean Modelling System (ROMS). The model was run for 4 years to examine the inter-annual, seasonal and shorter term (~10 days) variability. The results confirmed the presence of the reversing current system, between the equator and Sri Lanka, in response to the changing wind field: the eastward flowing Southwest Monsoon Current (SMC) during the Southwest (SW) monsoon transporting 11.5 Sv and the westward flowing Northeast Monsoon Current (NMC) transporting 9.5 Sv during the Northeast (NE) monsoon, respectively. A recirculation feature located to the east of Sri Lanka during the SW monsoon, the Sri Lanka Dome, is shown to result from the interaction between the SMC and the Island of Sri Lanka. Along the eastern and western coasts, during both monsoon periods, flow is southward converging along the south coast (see Figure). During the SW monsoon the Island deflects the eastward flowing SMC southward whilst along the east coast the southward flow results from the Sri Lanka Dome recirculation. The major upwelling region, during both monsoon periods, is located along the south coast resulting from southward flow converging along the south coast and subsequent divergence associated with the offshore transport of water(see Figure). Higher surface chlorophyll concentrations were observed during the SW monsoon. The location of the flow convergence and hence the upwelling centre was dependent on the relative strengths of wind driven flow along the east and west coasts: during the SW (NE) monsoon the flow along the western (eastern) coast was stronger migrating the upwelling centre to the east (west). 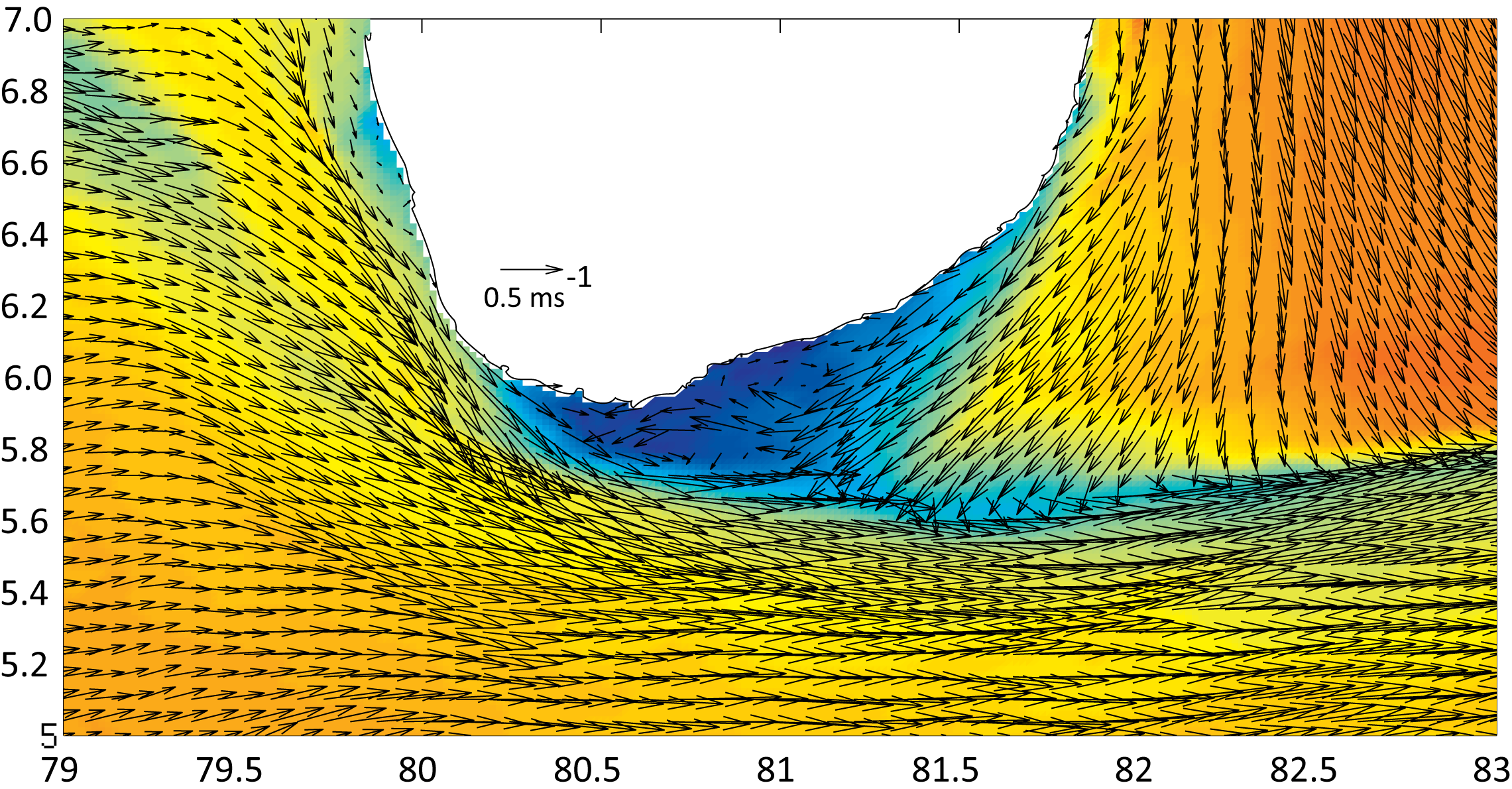