In this study, a meso-scale non-hydrostatic model developed by the Japan Meteorological Agency (JMA) is used to reproduce the observed Kàrmàn vortex shedding, where initial and boundary conditions are given by the meso-scale objective analysis data of the JMA. The cases investigated here occurred on 16 and 20 February 2013 when satellite images clearly capture Kàrmàn vortex shading behind the Jeju Island over the East China sea. The size of simulation’s domain is about 800 km by 1200 km in the horizontal direction, and the Jeju Island locates the center of the domain. The horizontal gird interval is 2 km. The cloud microphysics including the ice phase is considered.

The numerical simulation successfully reproduced realistic Kàrmàn vortex shading which accompany characteristic clouds in the wake of the Jeju Island (see Figure; shading show mixing ratio of cloud water). The size of the vortices and there intervals appear to be comparable to those observed by the satellite. 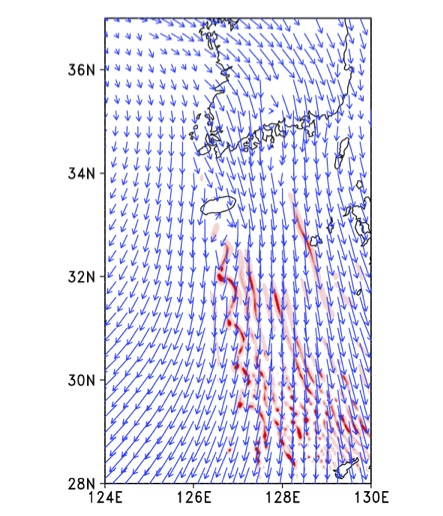