Quantitative modeling of flow and transport through fractured geological media is challenging due to the inaccessibility of the underlying medium properties and the complex interplay between heterogeneity and small scale transport processes such as heterogeneous advection, matrix diffusion, hydrodynamic dispersion and adsorption. This complex interplay leads to anomalous (non-Fickian) transport behavior, the origin of which remains a matter of debate: whether it arises from variability in fracture permeability (velocity heterogeneity), connectedness in the fracture network (velocity correlation), or interaction between fractures and matrix. Here we show that this uncertainty of heterogeneity- vs. correlation-controlled transport can be resolved by combining convergent and push-pull tracer tests because flow reversibility is strongly dependent on correlation, whereas late-time scaling of breakthrough curves is mainly controlled by heterogeneity. We build on this insight, and propose a Lagrangian statistical model that takes the form of a continuous time random walk (CTRW) with correlated particle velocities. In this framework, flow heterogeneity and flow correlation are quantified by a Markov process of particle transition times that is characterized by a distribution function and a transition probability. Our transport model captures the anomalous behavior in the breakthrough curves for both push-pull and convergent flow geometries, with the same set of parameters. We validate our model in the Ploemeur observatory in France. Thus, the proposed correlated CTRW modeling approach provides a simple yet powerful framework for characterizing the impact of flow correlation and heterogeneity on transport in fractured media. 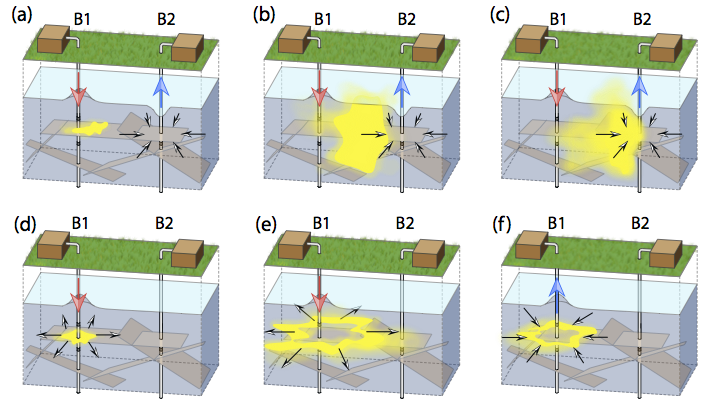