PP41F-02:
How the Surface Seawater of the South China Sea Exchanged CO2 with the Atmosphere over the Last Glacial Cycle?

Atmospheric CO2 content, changing synchronously with temperature over recent glacial cycles, is considered as one of the most important mechanisms regulating climate change. The ocean is the dominant force driving atmospheric CO2 changes in glacial cycles. The CO2 sink of global coastal seas currently comprise 21% of the net sea-air CO2 flux of the global ocean, therefore coastal seas play important role in adjusting atmospheric CO2. The South China Sea (SCS), one of the largest coastal seas separating Asia from the Pacific, currently acts as a source of atmospheric CO2 due to high seawater temperature and intense vertical mixing bringing CO2 of deep sea to the surface.

We measured B/Ca ratios in planktonic foraminifers, Globigerinoides ruber and Pulleniatina obliquiloculata, from MD05-2896 located in the southern SCS to reconstruct surface water pH (pHsw) and thermocline water pH (pHtw) and then calculate pCO2 of surface water (pCO2sw) and pCO2 of thermocline water (pCO2tw) over the last glacial cycle. Additionally, Mg/Ca ratios and δ18O were measured in G.ruber and P. obliquiloculata to reconstruct seawater temperature and salinity. The difference of pCO2 between surface water and atmosphere (ΔpCO2sw-atm) were positive during Holocene and from MIS5.1 to MIS5.4, implying that the southern SCS was the source of atmospheric CO2. The Holocene result coincides with the modern observation. During the last glacial period, the southern SCS became the sink of atmospheric CO2, indicated from the negative ΔpCO2sw-atm values.

We also discovered that ΔpCO2sw-atm, the difference of pCO2 between thermocline and surface water (ΔpCO2tw-sw) and thermocline water temperature (TWT) have similar change trend, presenting obvious 20,000-year precession cycle. Therefore, we regard TWT as one of the dominant elements effecting the SCS to absorb or release CO2. When TWT were lower during glacial time, the mixed layer was able to dissolve more CO2, with larger ΔpCO2tw-sw, and the surface water tended to absorb CO2 from the atmosphere. Besides, weakened deep ventilation involving vertical mixing and advection in the SCS during the last glacial period was also beneficial for the southern SCS to become the sink of atmospheric CO2. 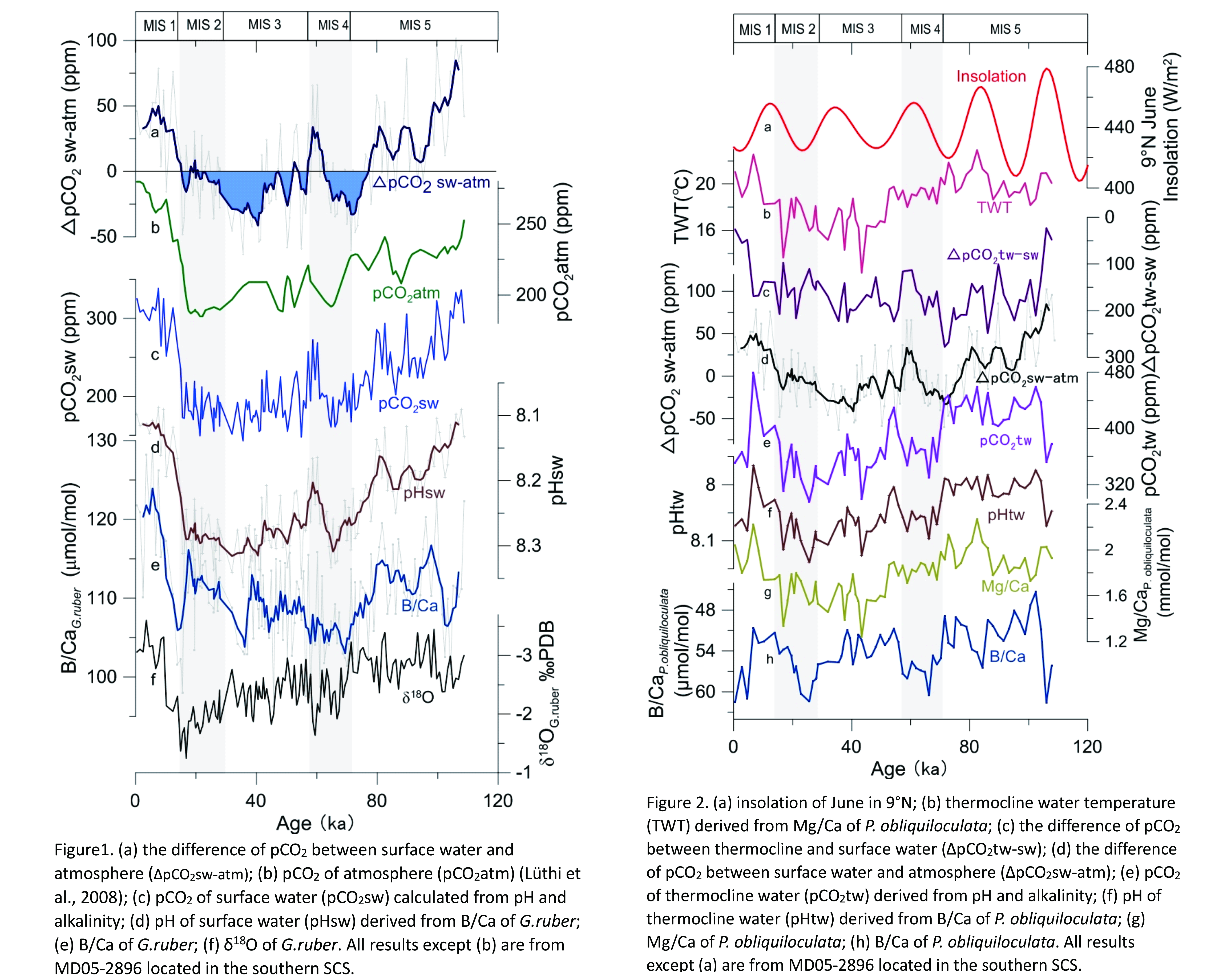