Fabricated all sky imagers are efficient and cost effective instruments for cloud detection and classification. Continuous operation of this instrument can result in the determination of cloud occurrence and cloud base heights for the paired system. In this study, a fabricated paired sky imaging system – consisting two commercial digital cameras (Canon Powershot A2300) enclosed in weatherproof containers - is developed in Manila Observatory for the purpose of determining cloud base heights at the Manila Observatory area. One of the cameras is placed on the rooftop of Manila Observatory and the other is placed on the rooftop of the university dormitory, 489m from the first camera. The cameras are programmed to simultaneously gather pictures every 5 min. Continuous operation of these cameras were implemented since the end of May of 2014 but data collection started end of October 2013. The data were processed following the algorithm proposed by Kassianov et al (2005). The processing involves the calculation of the merit function that determines the area of overlap of the two pictures. When two pictures are overlapped, the minimum of the merit function corresponds to the pixel column positions where the pictures have the best overlap. In this study, pictures of overcast sky prove to be difficult to process for cloud base height and were excluded from processing. The figure below shows the initial results of the hourly average of cloud base heights from data collected from November 2013 to July 2014. Measured cloud base heights ranged from 250m to 1.5km. These are the heights of cumulus and nimbus clouds that are dominant in this part of the world. Cloud base heights are low in the early hours of the day indicating low convection process during these times. However, the increase in the convection process in the atmosphere can be deduced from higher cloud base heights in the afternoon. The decrease of cloud base heights after 15:00 follows the trend of decreasing solar energy in the atmosphere after this time. The results show the potential of these instruments to determine cloud base heights on prolonged time intervals. The continuous operation of these instruments is implemented to gather seasonal variation of cloud base heights in this part of the world and to add to the much-needed dataset for future climate studies in Manila Observatory. 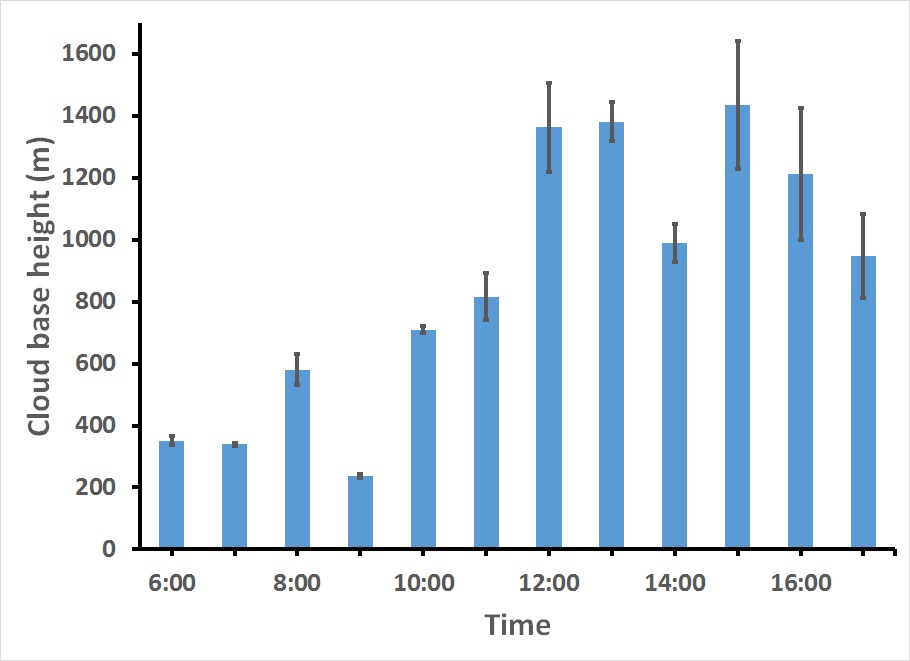