Exploratory one-line coastal models have been used to investigate the formation and evolution of coastal geomorphic features developed on sandy coasts, and are often applied by engineers for coastline management. Existing one-line models discretise the coast in a Cartesian coordinate system, limiting the evolution of the coastline to the cardinal directions, inhibiting some models from handling complex coastal geometries with high plan-form curvature. We developed a vector-based one-line model using local shoreline coordinates in order to evolve complex coastline geometries more effectively, including islands. The vector-based approach aids model efficiency whilst allowing complex coastal forms such as headland bay beaches, spits, sand waves and islands to be modelled. The coastline is discretised into polygonal, trapezoid or triangular cells depending on the coastline geometry being considered and the shoreface evolves normal to the local shoreline configuration. As in existing one-line models, changes in shoreline position are driven by gradients in alongshore sediment flux, calculated as a function of breaking wave conditions and integrated across the shoreface depth (in this case using the CERC equation). Waves are transformed following Airy wave theory, assuming that depth contours are locally shore-parallel. Additional rules for refraction and diffraction in the shadow of headlands or coastal structures have also been incorporated. We demonstrate the model’s potential by applying it to the development of concave and convex shoreline features. In particular we focus on the formation and evolution of headland bay beaches in the lee of headlands or sea defences, exploring the influence of varying offshore wave climates on emergent morphologically steady crenulate bay forms. We compare numerical modelling results to predictions of empirical models for the equilibrium form of crenulate bays as well as examples from nature. 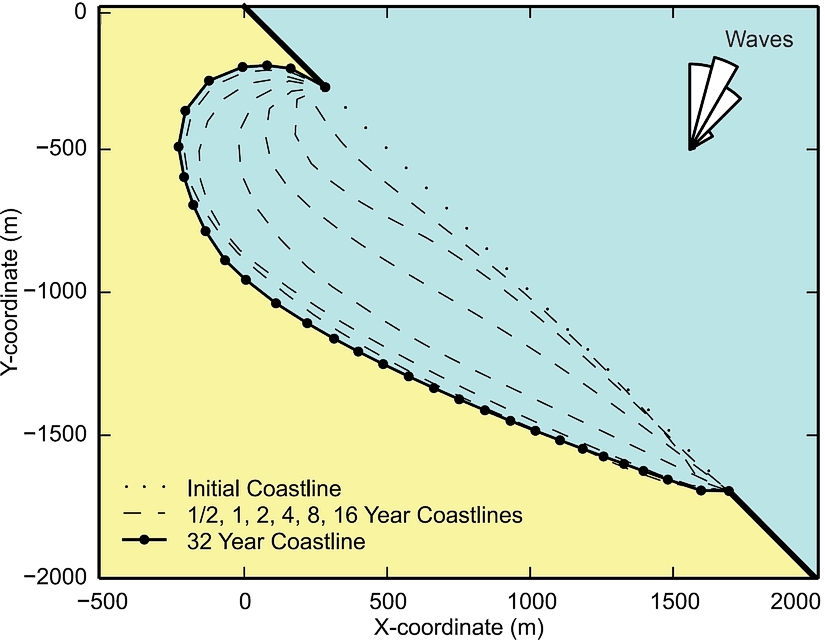