The Cloud-Aerosol Transport System (CATS), built at NASA Goddard Space Flight Center as a payload for the International Space Station (ISS), is set to launch in the late 2014. CATS is an elastic backscatter lidar operating in one of three science modes with three wavelengths (1064, 532, 355 nm) and HSRL capability at 532 nm. Depolarization measurements will be made at the 532 and 1064 nm wavelengths. The CATS science modes are described in Figure 1. The ISS orbit is a 51 degree inclination orbit at an altitude of about 405 km. This orbit provides more comprehensive coverage of the tropics and mid-latitudes than sun-synchronous orbiting sensors, with nearly a three day repeat cycle. Thus, science applications of CATS include cloud and aerosol climate studies, air quality monitoring, and smoke/volcanic plume tracking.

Current uncertainties in cloud and aerosol properties limit our ability to accurately model the Earth’s climate system and predict climate change. These limitations are due primarily to difficulties in adequately measuring aerosols and clouds on a global scale. A primary science objectives of CATS is to provide global aerosol and cloud vertical profile data in near real time to for assimilation in aerosol transport models such as the NASA GEOS-5 model. Furthermore, the vertical profiles of cloud and aerosol properties provided by CATS will complement current and future passive satellite sensors.

Another important science objective of CATS is to advance technology in support of future mission development. CATS will employ 355 nm and HSRL capabilities, as well as depolarization at multiple wavelengths. These expanded measurement capabilities will provide the science community with new and improved global data products that have yet to be retrieved from space-based lidar. In preparation for launch, simulations of the CATS lidar signal are produced using GEOS5 model data to develop and test future data products. An example of the simulated CATS attenuated total backscatter for the 532 nm parallel channel is shown in Figure 2 using the GEOS-5 model forecast from 15 July 2009. This work provides an overview of the CATS mission, science objectives and simulated data. 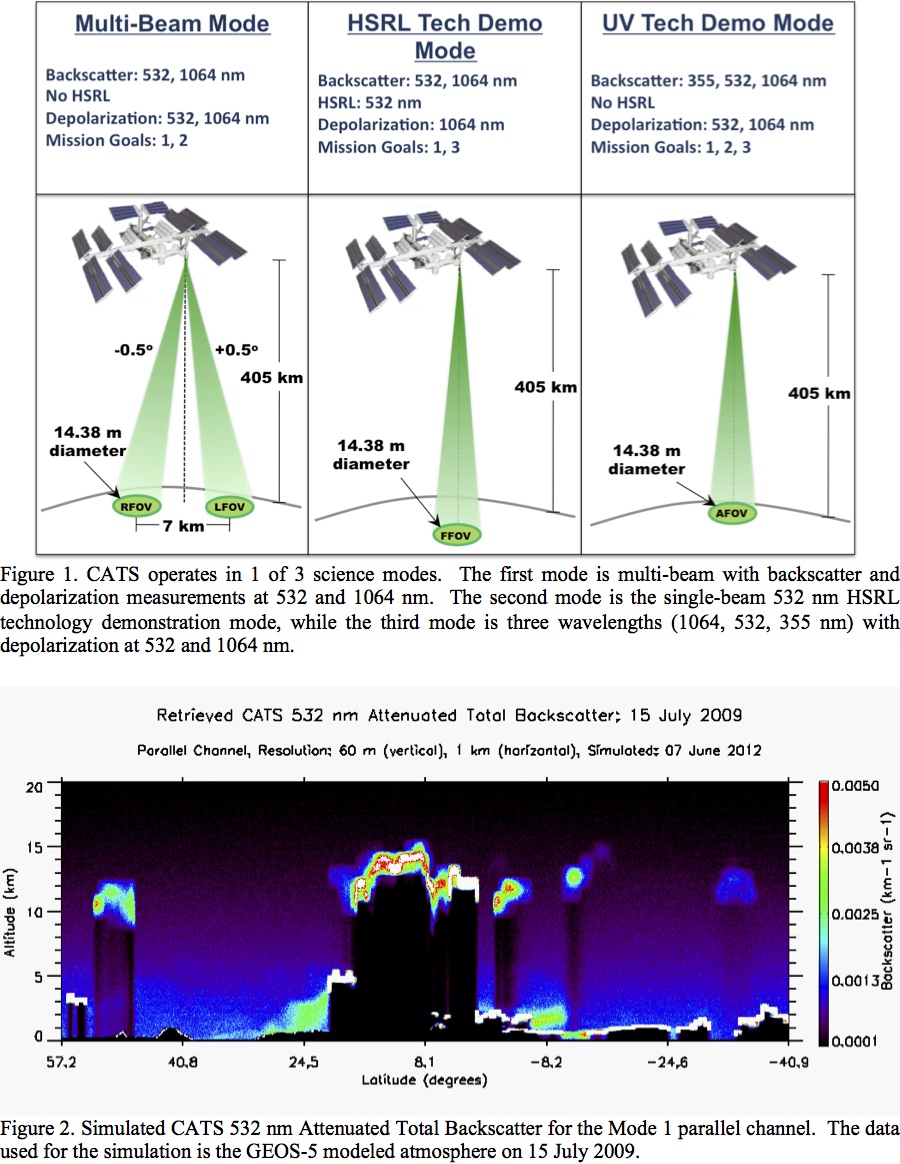