I re-examine the lower crust and mantle relaxation following two large events in the Mojave Desert: the 1992 M7.3 Landers and 1999 M7.1 Hector Mine, California, earthquakes. More than a decade of GPS time series from regional sites out to 250 km from the ruptures are used to constrain models of postseismic relaxation. Crustal motions in the Mojave Desert region are elevated for several years following each event, with perturbations from a pre-Landers background of order mm to cm per year. I consider afterslip and relaxation of the ductile lower crust and mantle to explain these motions. To account for broad scale relaxation, the Burgers body model is employed, involving Kelvin (transient) viscosity and rigidity and Maxwell (steady state) viscosity and rigidity. I use the code VISCO2.5D to perform 2.5D modeling of the postseismic relaxation (3D quasi-static motions computed on 2D, laterally heterogeneous viscoelastic structures; Pollitz, 2014 GJI). Joint afterslip / postseismic relaxation modeling of continuous GPS time series up to 10.46 years following the Hector Mine earthquake (i.e. up to the time of the 2010 M7.2 El Mayor-Cucapah earthquake) reveals that a northwest-trending `southwest domain' that envelopes the San Andreas fault system and western Mojave Desert has ~4 times larger Maxwell mantle viscosity than the adjacent `northeast domain' that extends inland and envelopes the Landers and Hector Mine rupture areas in the central Mojave Desert. This pattern is counter to that expected from regional heat flow, which is higher in the northeast domain, but it is explicable by means of a non-linear rheology that includes dependence on both strain rate and water concentration. I infer that the southwest domain mantle has a relatively low steady-state viscosity because of its high strain rate and water content. The relatively low mantle water content of the northeast domain is interpreted to result from the continual extraction of water through igneous and volcanic activity over the past ~20 Myr. The inference of Maxwellian viscosities is possible because the material relaxation times involved (5 years and 20 years for the SW and NE domains, respectively) are to a large extent spanned by the decade of available post-Hector Mine observations. 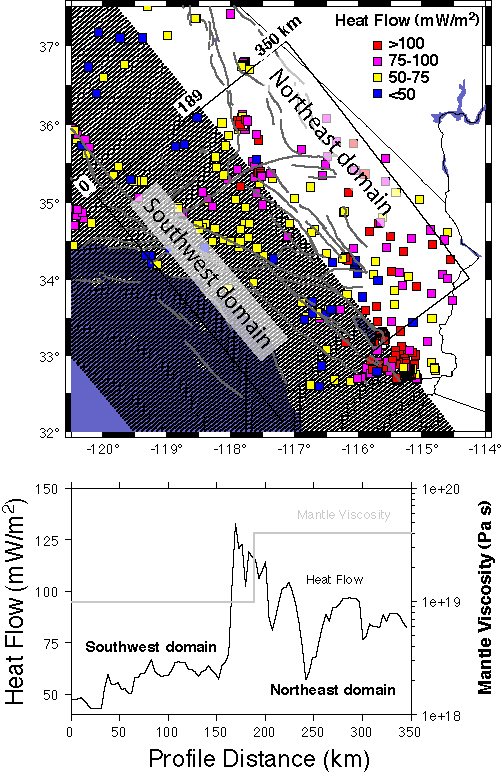