Zones of continent collision form mountain ranges with high topographies and complex geometries. Compressional stresses during ongoing convergence result in crustal thickening and localized deformation, where crustal material is transported and redistributed within the orogen.

We use numerical high-resolution thermo-mechanical models to investigate the physical processes of continent collision zones and its implications on rock exhumation. We demonstrate that compression of two continental blocks, separated by a rheologically weak suture zone can result in (i) doubly-vergent (Fig. A) or (ii) single-sided orogens (Fig. B), with distinct geometries, deformation and exhumation patterns. The transition between these different modes of collision is strongly controlled by the rheology of the continental lithosphere and therefore its temperature distribution. Doubly-vergent orogens form at relatively high thermal gradients, while single-sided orogens are typical for lower ones.

Doubly-vergent orogens (Fig. A) are formed in response to the gradual accretion of crustal material to the upper plate along retro-shears. In these models continental subduction results in upper plate deformation and nested exhumation against retro-shears. Typical examples include the collision recorded by the Swiss Alps and the Pyrenees. In contrast, single-sided orogens are characterized by large-scale lower plate deformation and are accompanied by the subduction of lower crustal material (Fig. B). Modeling infers that shortening and associated exhumation will gradually propagate towards the foreland. In this situation, no significant retro-shear formation is observed, which is in agreement with recent physical modelling studies on deformation of the continental lithosphere [Willingshofer et al., 2013]. Natural examples of such single sided orogens are common in the Mediterranean (Carpathians, Dinarides, Apennines, Betics) or the SE Asia subduction zones.

We conclude that deformation and exhumation in continent-continent collision zones may occur in foreland or hinterland settings, depending on the rheological structure of the continental lithosphere, forming single-sided or doubly vergent orogens. 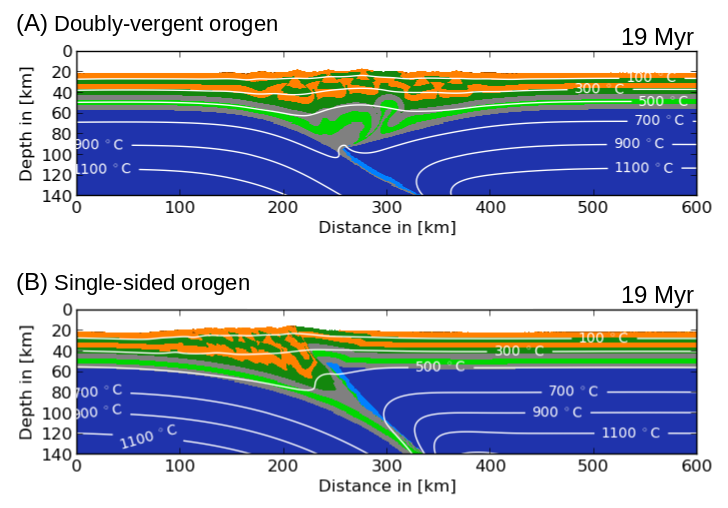