This project has the objective to study a landfill located on the margins of Tietê River, in São Paulo, Brazil, using the electroresistivity tomography method (ERT). Due to huge organic matter concentrations in the São Paulo Basin quaternary sediments, there is subsurface depth related biogas accumulation (CH4 and CO2), induced by anaerobic degradation of the organic matter. 2D resistivity sections were obtained from a test area since March 2012, a total of 7 databases, being the last one dated from October 2013. The studied line has the length of 56m, the electrode interval is of 2m. In addition, there are two boreholes along the line (one with 3 electrodes and the other one with 2) in order to improve data quality and precision. The boreholes also have a multi-level sampling system that indicates the fluid (gas or water) presence in relation to depth. With our results it was possible to map the gas plume position and its area of extension in the sections as it is a positive resistivity anomaly, with the gas level having approximately 5m depth. With the time-lapse analysis (Matlab script) between the obtained 2D resistivity sections from the site, it was possible to map how the biogas volume and position change in the landfill in relation to time. Our preliminary results show a preferential gas pathway through the subsurface studied area. A consistent relation between the gas depth and obtained microbiological data from archea and bacteria population was also observed. 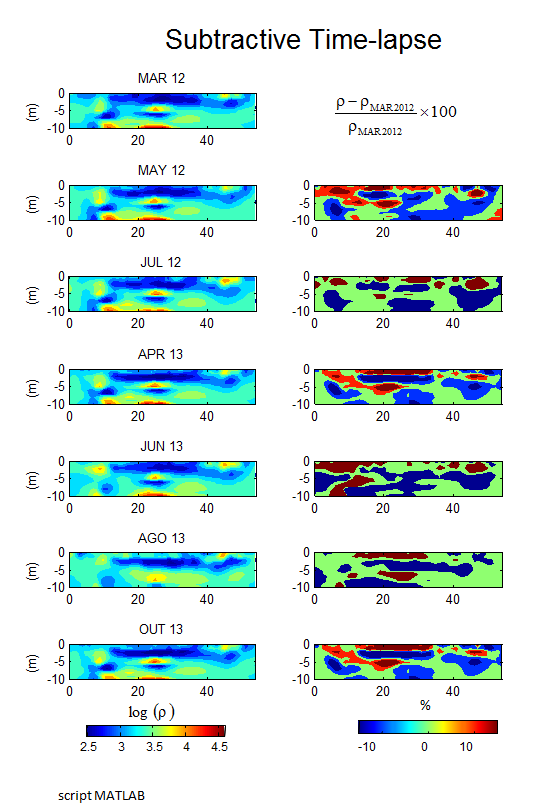