In many dynamic vegetation models, degradation of the tropical forests is induced because they assume that productivity falls rapidly when temperatures rise in the region of 30-40°C. Apart plant respiration, this is due to the assumptions on the temperature optima of photosynthetic capacity, which are low and can differ widely between models, where in fact hardly any empirical information is available for tropical forests. Even less is known about the possibility that photosynthesis will acclimate to changing temperatures. The objective of this study to is to provide better estimates for optima, as well as to determine whether any acclimation to temperature change is to be expected.

We present both new and hitherto unpublished data on the temperature response of photosynthesis of Amazon rainforest trees, encompassing three sites, several species and five field campaigns. Leaf photosynthesis and its parameters were determined at a range of temperatures. To study the long-term (seasonal) acclimation of this response, this was combined with an artificial, in situ, multi-season leaf heating experiment.

The data show that, on average for all non-heated cases, the photosynthetic parameter Vcmax weakly peaks between 35 and 40 ˚C, while heating does not have a clearly significant effect. Results for Jmax are slightly different, with sharper peaks. Scatter was relatively high, which could indicate weak overall temperature dependence. The combined results were used to fit new parameters to the various temperature response curve functions in a range of DGVMs. The figure shows a typical example: while the default Jules model assumes a temperature optimum for Vcmax at around 33 ˚C, the data suggest that Vcmax keeps rising up to at least 40 ˚C. Of course, calculated photosynthesis, obtained by applying this Vcmax in the Farquhar model, peaks at lower temperature. Finally, the implication of these new model parameters for modelled climate change impact on modelled Amazon forests will be assessed, where it is expected that predicted die-back will be less. 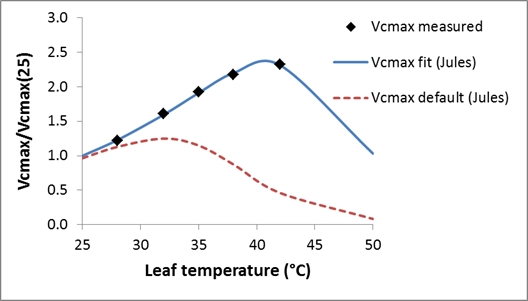