The formation of new aerosol particles from precursor vapours (nucleation) is an important source of global cloud condensation nuclei (CCN). Simulations using global aerosol models suggest that 40-70% of global CCN originate from nucleation. However, because of the challenges inherent in measuring particles with diameters of only a few nanometres, and in maintaining controlled, well-defined conditions throughout experiments, the exact mechanisms which determine nucleation rates throughout the atmosphere are not yet fully understood.

The CERN CLOUD experiment uses state-of-the-art equipment to measure nucleation rates under conditions which cover the full atmospheric range. We have used this unique set of measurements to formulate a semi-empirical parametrisation of inorganic nucleation, which we have then implemented in the global aerosol microphysics model GLOMAP. The parametrisation depends on temperature, and on the concentrations of sulphuric acid, ammonia, and ions.

Figure 1 shows the change over a solar cycle in cloud condensation nuclei at 0.2% supersaturation at one kilometre altitude, equivalent to low cloud level. The change in the average value over the whole globe is small, just -0.46 %. We will also present the changes due to a reduction of 80% in ammonia concentrations (roughly equivalent to pre-industrial conditions), and a uniform global temperature increase of 2.2 K (which is a realistic estimate of the mean increase in global temperatures in the coming decades). 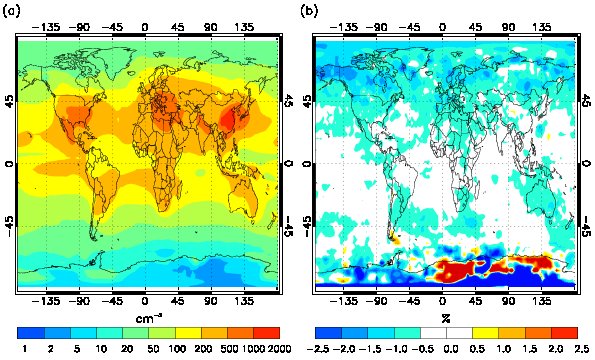