Automated identification of particles in lunar thin sections is necessary for practical measurement of particle shape, void characterization, and quantitative characterization of sediment fabric. This may be done using image analysis, but several aspects of the lunar regolith make such automations difficult. For example, many of the particles are shattered; others are aggregates of smaller particles. Sieve sizes of the particles span 5 orders of magnitude. The physical thickness of a thin section, at a nominal 30 microns, is large compared to the size of many of the particles. Image acquisition modes, such as SEM and reflected light, while superior to transmitted light, still have significant ambiguity as to the volume being sampled. It is also desirable to have a technique that is inexpensive, not resource intensive, and analytically robust. To this end, we have developed an image acquisition and processing protocol that identifies and delineates resolvable particles on the front surface of a lunar thin section using a petrographic microscope in reflected light. For a polished thin section, a grid is defined covering the entire thin section. The grid defines discrete images taken with 20% overlap, minimizing the number of particles that intersect image boundaries. In reflected light mode, two images are acquired at each grid location, with a closed aperture diaphragm. One image, A, is focused precisely on the front surface of the thin section. The second image, B, is made after the stage is brought toward the objective lens just slightly. A bright fringe line, analogous to a Becke line, appears inside all transparent particles at the front surface of the section in the second image. The added light in the bright line corresponds to a deficit around the particles. Particle identification is done using ImageJ and uses multiple steps. A hybrid 5x5 median filter is used to make images Af and Bf. This primarily removes very small particles just below the front surface of the section. Bf – (Bf/Af) is then computed. The division strongly enhances the fringe and the deficit, while minimizing the correlated information in A and B. The subtraction emphasizes the particle-epoxy boundaries. The resulting image is converted to binary, and then holes are filled. Cracks are removed using a median-based operator. 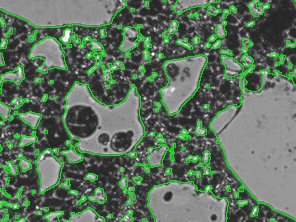