Carbon (C) in thawing permafrost soils may have global impacts on climate change, yet controls on its processing and fate are poorly understood. The dominant fate of dissolved organic C (DOC) released from soils to inland waters is either complete oxidation to CO2 or partial oxidation and river export to oceans. Both processes are most often attributed to bacterial respiration, but we recently showed that photochemical oxidation exceeds rates of respiration and accounts for 70-95% of total DOC processed in the water column of arctic lakes and rivers. While the overall dominance of photochemical processing in streams and lakes remained, the fate of DOC varied consistently by water type. In small streams DOC was mainly mineralized by sunlight to CO2, while in lakes the main fate of DOC was partial photo-oxidation. Large rivers were intermediate between these end members, and photo-mineralization to CO2 was about equal to or less than partial photo-oxidation. We suggest this pattern is a result of light-exposure history, where DOC leached from soils into headwater streams has little prior light exposure and is labile to complete photo-oxidation, but as light exposure increases moving downstream and into lakes with longer residence times the DOC photo-lability declines. Thus as easily photo-mineralized moieties are removed, DOC fate shifts toward partial photo-oxidation and downstream export in rivers and lakes. At the basin scale, photochemical processing of DOC is about one third of the total CO2 released from surface waters, and is thus an important, newly measured component of the Arctic C budget. We also suggest that these photochemical transformations of DOC will occur in any shallow surface water, and could be important for better understanding inland water carbon cycling. 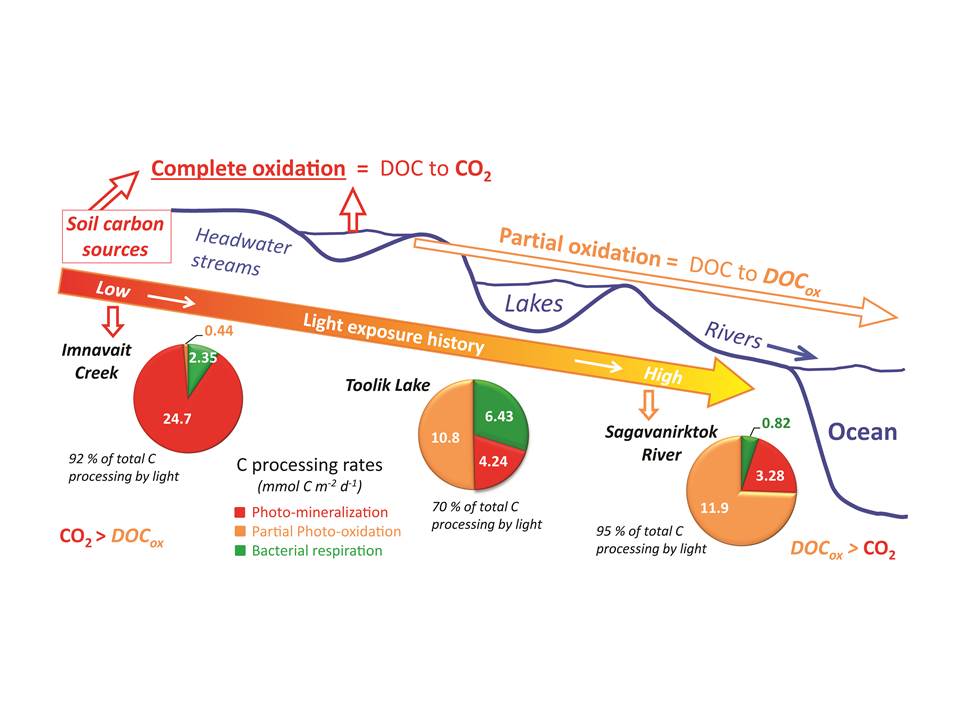