Ocean Networks Canada (ONC; http://www.oceannetworks.ca/) operates the multidisciplinary NEPTUNE and VENUS cabled ocean observatories off the west coast of Canada and an increasing number of miniature ocean observatories, such as in the Canadian Arctic. All data collected by these observatories are archived and publicly available through ONC's Oceans 2.0 data portal. Much of the data are related to marine geohazards, such as earthquakes, submarine landslides, and tsunamis and are delivered in real-time to various agencies, including early warning centers.

The NEPTUNE and VENUS cabled observatories consist of over 850 km of cable deployed inshore and offshore off Vancouver Island and covers the coastal zones, the northern part of the Cascadia subduction zone, Cascadia Basin, and the Endeavour Segment of the Juan de Fuca Ridge. Geological evidence suggests that there is a 25–40% probability of a magnitude 8 or greater megathrust earthquake along the Cascadia subduction zone in the next 50 years and that the most recent great earthquake (estimated magnitude ~9.0) that occurred in 1700 caused widespread tsunami damage. However, most of the tsunamis that arrive in the area originate from distant sources around the Pacific. Over the last 100 years, numerous major tsunamis have occurred in the Pacific Ocean, killing many tens of thousands of people.

The NEPTUNE observatory includes high-precision bottom pressure recorders (BPRs) at each major nodes and a tsunami meter consisting of three BPRs arranged on a ~20 km radius circle around the flat Cascadia Basin site. On September 30, 2009, just days after the first NEPTUNE instruments were installed, the first tsunami waves of 2.5-6.0 cm amplitude generated by the Mw 8.1 Samoa earthquake were recorded by six BPRs. The Samoan tsunami was followed by several other events recorded by the network, including the 2010 Chilean tsunami, the 2011 Tōhoku-Oki earthquake and tsunami, and the 2012 Haida Gwaii tsunami. These open-ocean observations were uncontaminated by coastal effects, demonstrating that NEPTUNE records from future tsunami events can be effectively used as real-time input to regional numerical tsunami forecast models. In fact, real-time data from NEPTUNE seismometers and BPRs already feed into the NOAA operated tsunami early warning systems. 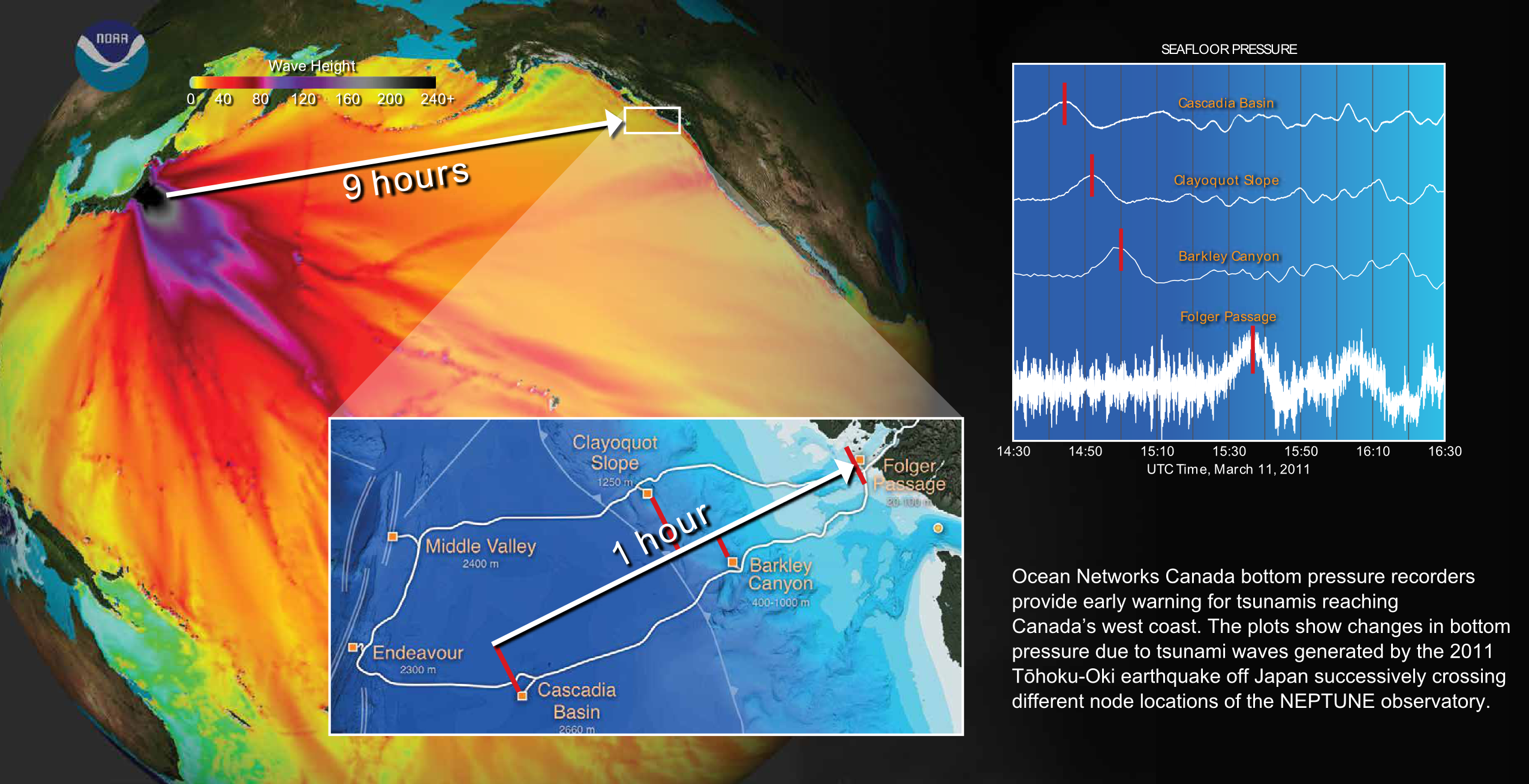