A43M-01:
Low Ozone and High Mixing Ratios of Long-Lived Trace Gases in the Tropical Tropopause Layer over the Western Pacific

The tropopause over the western tropical Pacific is thought to be one of the primary entry points of air from the troposphere into the stratosphere. In this region, temperatures are low enough in the tropical tropopause layer (TTL; ~14-18.5 km) to dehydrate air to the low values observed in the stratosphere. The NASA Airborne Tropical Tropopause Experiment (ATTREX) mission was designed to study the transport of water vapor and other trace gases in the TTL over the Pacific Ocean, in order to better understand how dehydration occurs and how ozone-depleting gases reach the lower stratosphere. The field campaign phase of the mission recently concluded with flights of the NASA Global Hawk unmanned aircraft over the western tropical Pacific from Guam in January-March 2014 (ATTREX-3). This followed two previous deployments with flights from California to the central and eastern tropical Pacific (ATTREX-1 and 2). Particularly in ATTREX-3, the long duration of the Global Hawk allowed observations over nearly a complete diurnal cycle in the TTL.

Over 100 vertical profiles in the TTL were obtained over the western tropical Pacific, as well as long sections at constant altitude. As expected, very low values of water vapor (a few ppm) were observed, and ice saturation was frequently encountered. Ozone was consistently low in the TTL (averaging ~20 ppb), with low values extending up to the tropopause, particularly in March 2014. While ozone as low as 20 ppb was occasionally observed over the central and eastern Pacific in February-March 2013 during ATTREX-2, it more often averaged 40-50 ppb, and typically increased slowly with height from about 14 km to the tropopause. In ATTREX-3, long-lived tracers such as N2O were very close to their tropospheric values over the western tropical Pacific. Sulfur hexafluoride (SF6) data indicated that sampled air masses originated in the tropics, with little in-mixing of extratropical air. Methane and CO often peaked near the local tropopause. These initial results suggest frequent deep convection, bringing air from the local marine boundary layer (with low ozone and high values of long-lived trace species) directly to the upper troposphere. The origins and transport of air in the TTL during ATTREX-3 will be discussed, as well as the reasons for and implications of the very low ozone observed. 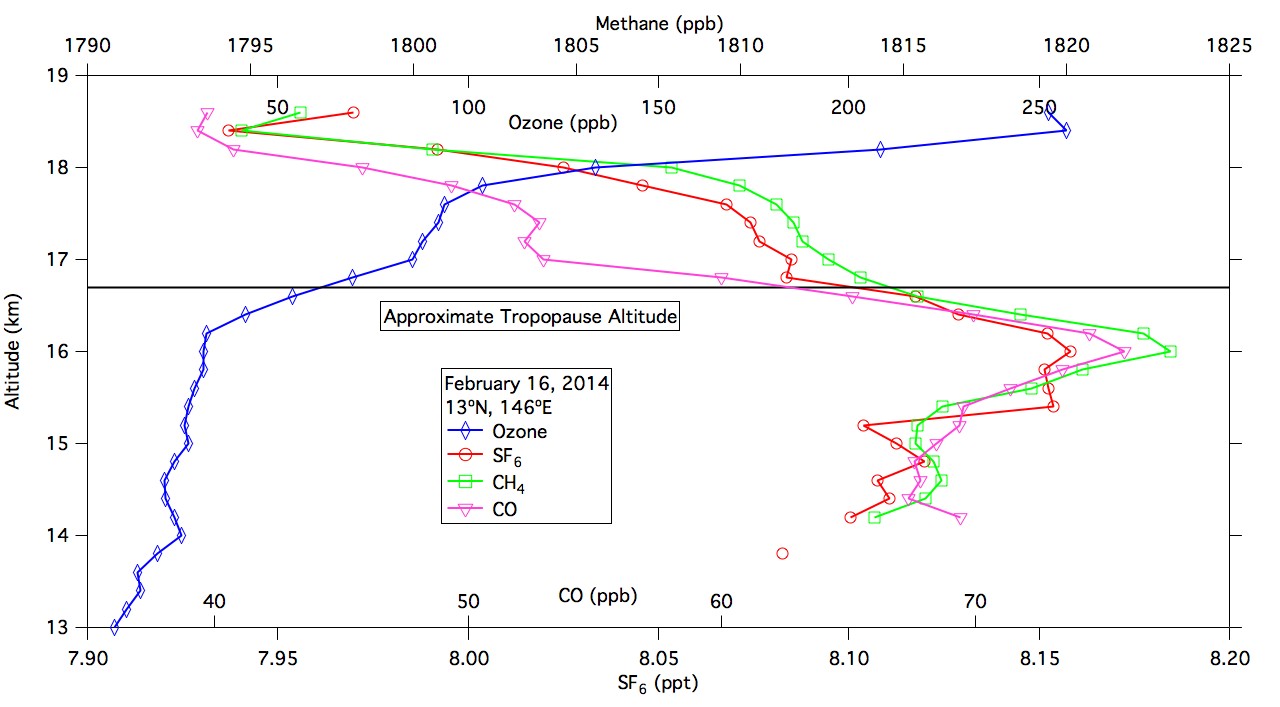