Sulfate aerosols have an important cooling effect on the Earth because they scatter sunlight back to space and form cloud condensation nuclei. However, understanding of the atmospheric sulfur cycle is incomplete, leading to uncertainty in the assessment of past, present and future climate forcing. Here we use annually resolved observations of sulfur and methanesulfonic acid (MSA) concentration in an array of precisely dated Southern Greenland ice cores to assess the history of sulfur pollution emitted from North America and Europe and the history of biogenic sulfate aerosol derived from the North Atlantic Ocean over the last 250 years. The ice core sulfur time series is found to closely track sulfur concentrations in North American and European precipitation since records began in 1965, and also closely tracks estimated sulfur emissions since 1850 within the air mass source region as determined by back trajectory analysis. However, a decline to near-preindustrial sulfur concentrations in the ice cores after 1995 that is not so extensive in the source region emissions indicates that there has been a change in sulfur cycling over the last 150 years. The ice core MSA time series shows a decline of 60% since the 1860s, and is well correlated with declining sea ice concentrations around Greenland, suggesting that the phytoplankton source of biogenic sulfur has declined due to a loss of marginal sea ice zone habitat. Incorporating the implied decrease in biogenic sulfur in our analysis improves the match between the ice core sulfur record and the source region emissions throughout the last 150 years, and solves the problem of the recent return to near-preindustrial levels in the Greenland ice. These findings indicate that the transport efficiency of sulfur air pollution has been relatively stable through the industrial era and that biogenic sulfur emissions in the region have declined. 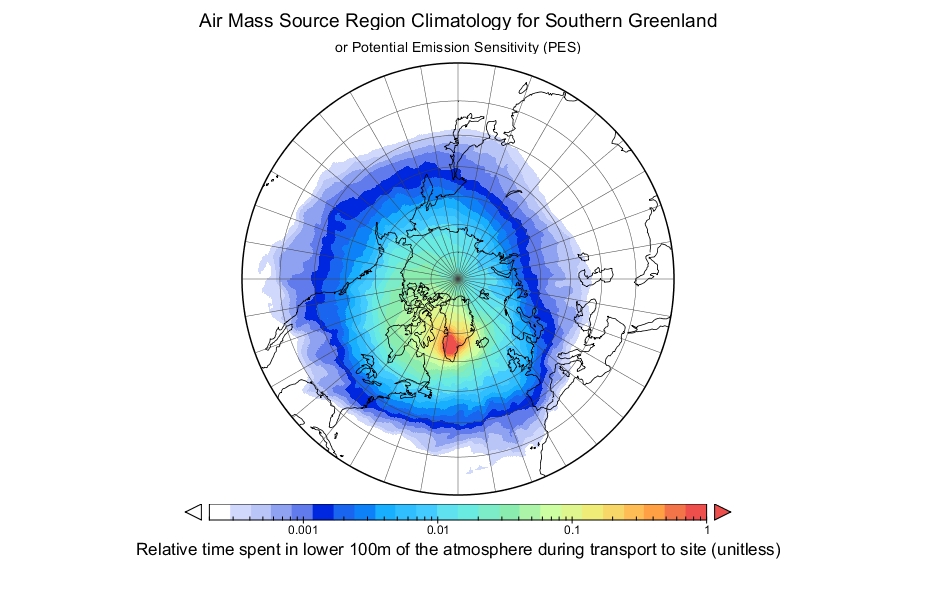