This contribution will present results from passive seismic studies of hydraulic fracture treatments in North American and Asian basins.

One of the key data types is a comparatively new surface-based seismic imaging product - “Tomographic Fracture Images®” (TFI®). The procedure is an extension of Seismic Emission Tomography (SET), which is well-established and widely used. Conventional microseismic results – microearthquake hypocenter locations, magnitudes, and focal mechanism solutions – are also obtained from the data via a branch of the processing workflow. TFI is accomplished by summing the individual time steps in a multidimensional SET hypervolume over extended periods of time, such as an entire frac stage. The dimensions of a SET hypervolume are the X, Y, and Z coordinates of the voxels, the time step (typically on the order of 100 milliseconds), and the seismic activity value. The resulting summed volume is skeletonized to produce images of the main fracture surfaces, which are known to occupy the maximum activity surfaces of the high activity clouds from theory, field studies, and experiments.

The orientation vs. area of the resulting TFIs can be analyzed in detail and compared with independent data sets such as volumetric structural attributes from reflection seismic data and borehole fracture data. We find that the primary effect of hydraulic fracturing is to stimulate preexisting natural fracture networks and faults. The combination of TFIs with hypocenter distributions and microearthquake focal mechanisms provides detailed information on subsurface stress compartmentalization. Faults are directly imaged which allows discrimination of fault planes from auxiliary planes of focal mechanism solutions. Examples that will be shown include simultaneous movement on a thrust fault and tear fault and examples of radically different stress compartments (e.g. extensional vs. wrench faulting) stimulated during a single hydraulic fracture treatment.

The figure shows a TFI of a single frac stage in the Eagle Ford FmFm that is unusually symmetrical and smooth near the perforations. Color shows intensity of cumulative seismic activity (red = high, violet = low). Note that the energy decreases and the complexity increases as the frac quenches in the natural fracture system. 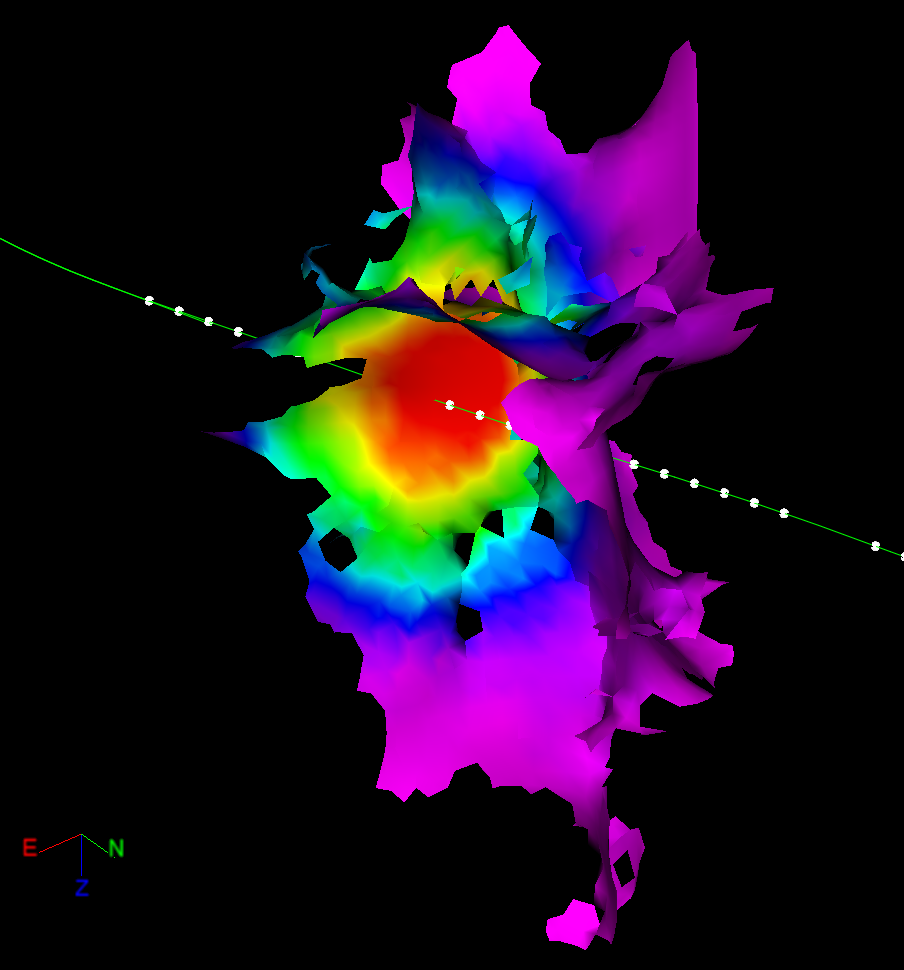