C43B-0381:
A closer look at the wintertime Antarctic sea ice trend with a focus on the Ross Sea

A partial least squares (PLS) regression approach is used to decompose sea ice concentration (SIC) into the sea level pressure (SLP) related component and a residual component. The former is dynamically forced by the atmosphere, and the latter reflects other thermodynamic and ocean processes. We then applied the self-organizing map (SOM) method to these two components separately and arrived at finite number of SH SIC variability patterns. The opposing SIC trends in the west Antarctic Seas, with an increase in the Ross Sea region and decrease over the Bellingshausin Sea and near the Antarctica Peninsula, are captured by both the SOM patterns based on the SLP component and those based on the residual component. Figure 1 shows that the SIC trend captured by the residual component (right panel) compares better than that captured by the SLP component (left panel), suggestive of dominance of ocean processes.

When applying the PLS on sea ice extent (SIE), with seasonal SIE being predictand and predictor fields including SLP and GPCP precipitation, we find that the fall season (MAM) precipitation has some skill (r=0.4) for wintertime (JJA) SIE. The preliminary results of the lag composites based on the residual SOM patterns show that MAM precipitation leads JJA SIC, with mixed layer depth (MLD) adjustment in response to MAM precipitation. A preliminary analysis of the vertical temperature and salinity in the Ross Gyre from an OGCM will also be presented to provide plausible mechanisms for the increased SIC trend in the Ross Sea in recent decades. 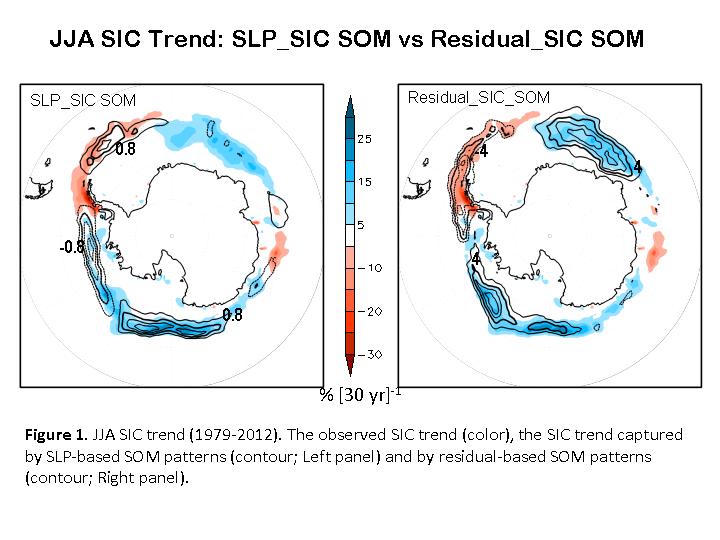