Precipitation radars in Low-Earth-Orbit provide vertically resolved profiles of rain and snow on a global scale. With the recent advances in miniaturized radar and CubeSat/SmallSat technologies, it would now be feasible to launch multiple copies of the same radar instrument in desirable formations to allow measurements of short time scale evolution of atmospheric processes. One such concept is the novel radar architecture compatible with the 6U CubeSat class that is being developed at JPL by exploiting simplification and miniaturization of the radar subsystems. The RaInCube architecture would significantly reduce the number of components, power consumption and mass with respect to existing spaceborne radars. The baseline RaInCube instrument configuration would be a fixed nadir-pointing profiler at Ka-band with a minimum detectable reflectivity better than +10 dBZ at 250m range resolution and 5 km horizontal resolution.

The low cost nature of the RaInCube platform would enable deployment of a constellation of identical copies of the same instrument in various relative positions in LEO to address specific observational gaps left open by the current missions that require high-resolution vertical profiling capability. A constellation of only four RaInCubes would populate the precipitation statistics in a distributed fashion across the globe and across the times of day, and therefore, would enable substantially better sampling of the diurnal cycle statistics.

One could extend this scheme by adding more RaInCubes in each of the orbital planes, and phase them once in orbit so that they would be separated by an arbitrary amount of time among them. Wide separations (say 20-30 min) would further extend the sampling of the diurnal cycle to sub-hourly scales. Narrower time separations between RaInCubes would allow studying the evolution of convective systems at the convective time scale in each region of interest and would reveal the dominant modes of evolution of each corresponding climatological regime.

A constellation of RaInCubes would also be a natural complement to other resources aiming at monitoring the evolution of weather systems, for example the Geostationary IR/VIS imagers, the NEXRAD network, and the GPM constellation. 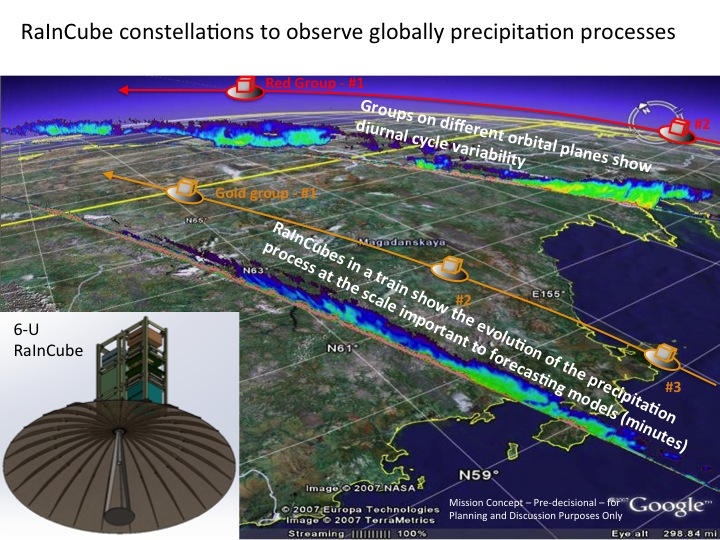