The Central Costa Rica Deformed Belt (CCRDB) is a ~100 km broad zone of deformation that marks the boundary between the Caribbean Plate and the Panama Microplate. From December 2011 to February 2012 an earthquake swarm took place on a portion of the CCRDB, near the town of Tobosi, in the Cartago province. In this study, we use data recorded by the National Seismological Network of Costa Rica (RSN: UCR-ICE) to relocate 22 of these earthquakes and calculate focal mechanisms. Additionally, we analyze the Tectonic Geomorphology of the region. Our results show a transtension structure near the town of Tobosi, which comprises at least three faults, named: the Tobosi, Tablon, and Alumbre faults. This structure is located only 5 km south of the Aguacaliente fault, which caused the deadliest earthquake in Costa Rican history on May 4, 1910 (Ms 6.4). The earthquake locations analyzed are aligned with the Tobosi Fault. The events varied in moment magnitude between 2.4 and 3.9 Mw and depths of 1 and 8 km. The largest events were felt mainly in the town of Tobosi and as far as San Jose, the capital city of Costa Rica. We found that the Tobosi fault is an active left-lateral strike-slip fault with a normal component and is the source of the Tobosi earthquake swarm. The study of active faults in Central Costa Rica is significant as it may greatly improve seismic hazards assessment for this region where most of the population and the main economic activities are concentrated. 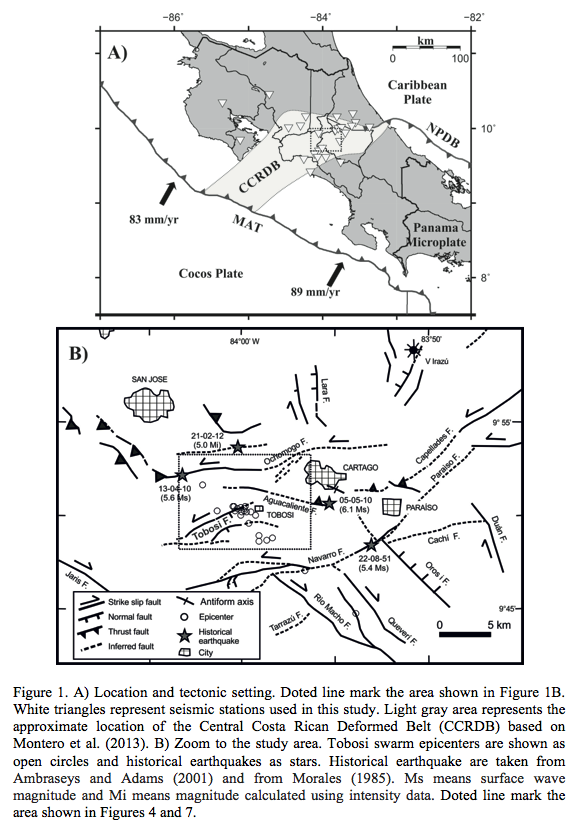