As a wet planet becomes hot, evaporation of the ocean provides a thick steam atmosphere. As the atmosphere thickens, the level at which optical depth is unity (whence radiative emission and absorption dominantly occur) rises into the atmosphere, first for thermal wavelengths and later for solar wavelengths. Consequently, two radiation limits emerge. First, an asymptotic limit on the thermal radiation, as the level at which thermal emission occurs tends towards a fixed temperature, decoupled from surface temperature. Next, a limit the albedo of the planet, as all incoming sunlight is either reflected or absorbed in the atmosphere and almost none reaches the surface. A runaway greenhouse occurs when the product of co-albedo and area-averaged incoming sunlight exceeds the thermal radiation limit. Earth today is perilously close to this [1].

Returning to the first sentence, we generate a thick atmosphere: the height of optical depth of unity becomes a non-trivial fraction of the planetary radius. Hence the area of the absorbing and emitting surfaces increase. Thermal emission wins slightly, as this occurs higher, increasing thermal emission in all cases. The underlying tendency is for a larger thermal limit for heavier planets due to pressure effects, making these appear more resistant to a runaway. However, atmospheric expansion affects light planets more, making these seem much more resilient. The least resilient planet would be between Mars-size and Venus-size (Figure 1).

It would be foolish to regard small planets as habitable. As the atmospheres become large, so does the problem of atmospheric escape. Theoretical considerations show hydrodynamic escape to happen disastrously for a Europa-size planet. The observation is that Mars is too feeble to hold on to any hefty atmosphere, even far from the Sun as it is, is probably relevant too. The take home points for habitable zone nerds are: (1) planet size matters (2) for small planets, atmospheric escape from a "moist greenhouse" state, with habitable surface temperatures, is the mortal wound. 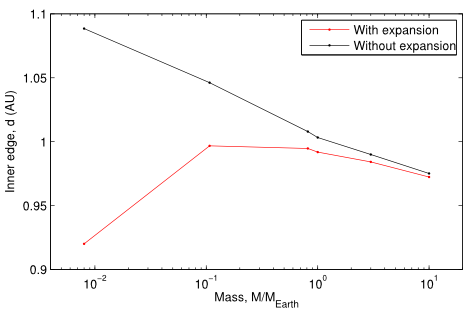