Coal surface mining is a significant landscape disturbance in the United States. Since 1977, the reclamation of mined lands has been regulated by the Surface Mine Control and Reclamation Act (SMCRA). Prior to the act, many coalfields were left un-reclaimed or partially reclaimed, with highly irregular topology and drainage networks. Under the act, the reverse is often true; adherence to SMCRA often leads to the homogenization of surfaces and channel networks. While both pre and post-SMCRA landscapes are highly altered, they exhibit strongly dissimilar characteristics. We examine pre-SMCRA, post-SMCRA and unmined watersheds at 3 spatial scales in order to compare the geomorphic differences between reclamation strategies. In particular, we attempt to separate anthropogenic factors from pre-existing, natural factors via comparisons to unmined watersheds. Our study design incorporates a 3 scale top-down analysis of 21 independent watersheds (7 of each treatment type). Each watershed has an area of approximately 1km2. All watersheds share similar geography, climate and geology. At the landscape scale, characteristics are derived from 0.762m (2.5ft) resolution Digital Elevation Models (DEMs). At the channel network scale, DEMs, as well as remote sensing data (including the National Wetlands Inventory database) are used. Finally, the reach scale incorporates longitudinal and cross-section surveys (using a total station) as well as a particle size distribution. At each scale, attributes are parameterized for statistical comparison. Post-SMCRA sites are characterized by a general reduction of watershed surface slopes (11.9% median) compared to pre-SMCRA (19.3%) and unmined (19.8%) sites. Both pre and post-SMCRA channel networks are characterized by significant surface impoundments (in the form of remnant headwall trenches on pre-SMCRA sites and engineered retention basins on post-SMCRA sites). Pre-SMCRA outlet reaches have significantly steeper bed slopes (2.79% mean) than both post-SMCRA (1.72% mean) and unmined (1.67% mean) reaches (1-way ANOVA p=0.0488 n=19). Our results demonstrate the differential alterations resulting from these reclamation strategies, which may lead to alteration of long-term geomorphic processes. Further investigations of hydrology and sediment transport are needed. 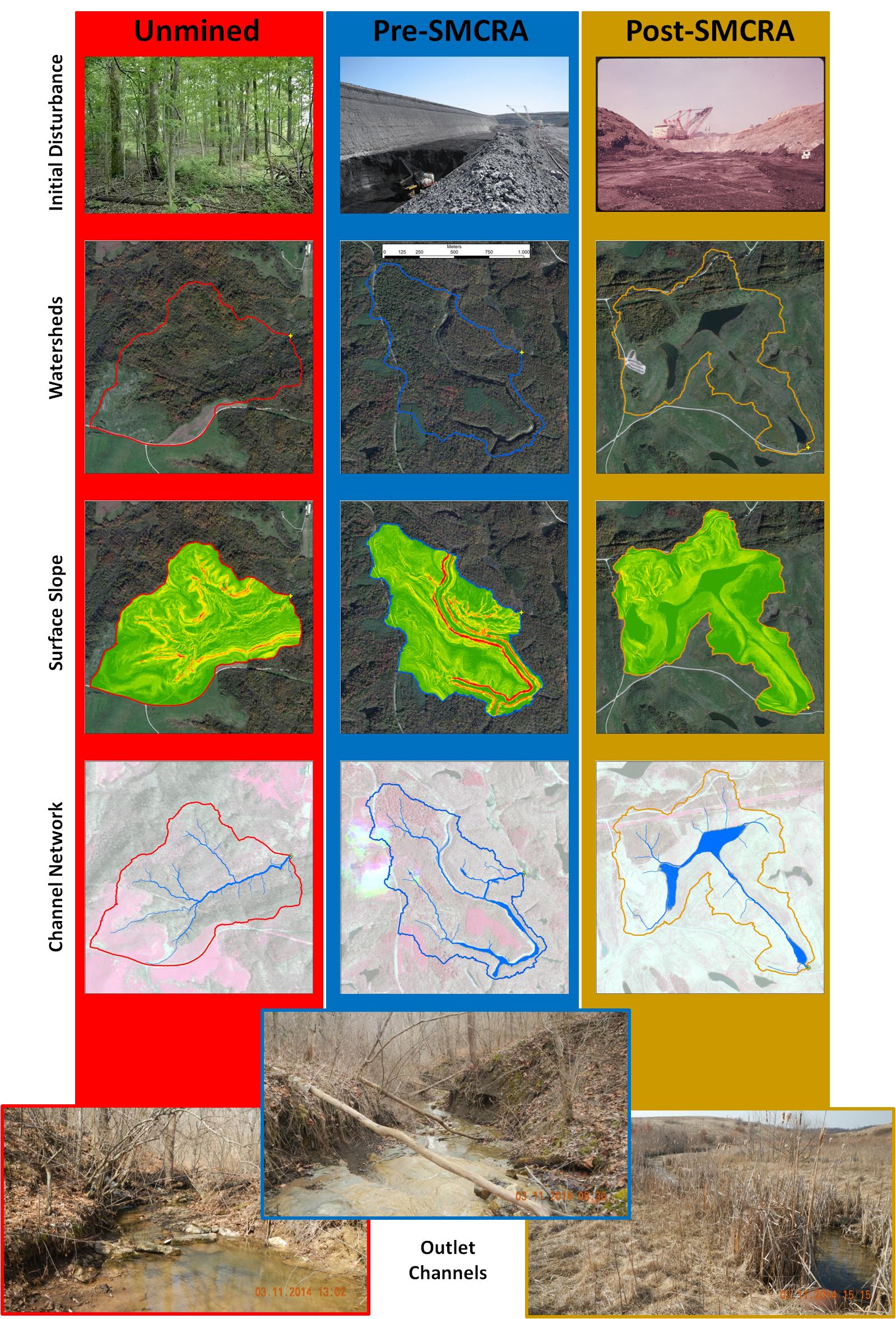