S31E-06:
A Three-Dimensional Shear-Velocity Model of the Atlantic Upper Mantle from Analysis of a Regional Dataset of Fundamental-Mode Rayleigh Waves

We investigate the three-dimensional (3-D) shear-velocity structure of the upper mantle beneath the Atlantic Ocean. Phase velocity in the period range 30-130 seconds is measured for approximately 10,000 fundamental-mode Rayleigh waves traversing the Atlantic basin. In order to isolate the signal of the oceanic upper mantle, paths with >30% of their length through continental upper mantle are excluded. The lateral distribution of Rayleigh wave phase velocity in the Atlantic upper mantle is explored with two approaches. One, phase velocity is allowed to vary only as a function of seafloor age. Two, a general two-dimensional parameterization is utilized in order to capture perturbations to age-dependent structure. In both scenarios, phase velocity shows a strong dependence on seafloor age at all periods, with higher velocity associated with older seafloor. Removing age-dependent velocity from the 2-D phase-velocity maps highlights areas of anomalously low velocity, almost all of which are proximal to locations of hotspot volcanism. The age-dependent phase velocities for the Atlantic are not consistent with a half-space cooling model and are best explained by a plate cooling model with thickness of 75 km and mantle temperature of 1400oC. In contrast, age-dependent phase velocities for the Pacific basin determined by Nishimura and Forsyth [1989] can be fit reasonably well by a half-space cooling model with mantle temperature approximately 50oC warmer than the Atlantic. Comparison of Rayleigh wave phase velocity and fractionation-corrected Na concentrations in mid-ocean-ridge basalts erupted at 87 axial ridge segments reveals a positive correlation coefficient that increases with period, as expected if along-ridge variations in mantle potential temperature are controlling both quantities. Depth-dependent variations in vertically-polarized shear velocity are explored with a 3-D model and allow for comparison to previous whole-basin studies of the Atlantic [e.g., Moquet and Romanowicz, 1990; Silveira and Stutzmnn, 2002] and to global tomographic studies. We assess the relative contributions of temperature, composition, partial melt, and volatiles to the imaged shear-velocity anomalies. 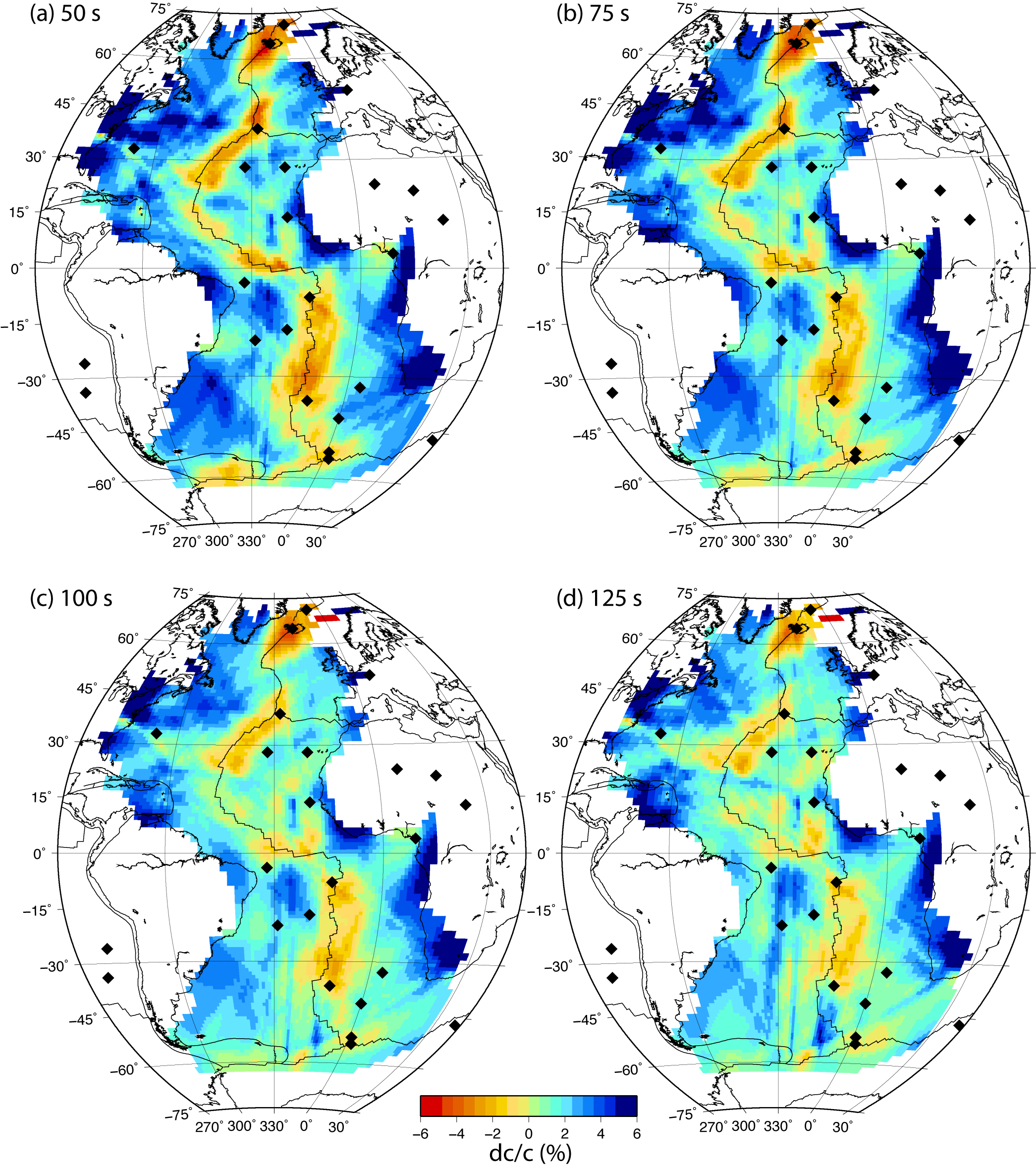