Observations of dune orientation provide information on unknown wind regimes, e.g. on other planets or in past climates. While orientation can be used to infer e.g. dominant wind directions, a more comprehensive ‘forward modeling’ approach first predicts the long-term wind field, then combines it with theory to predict dune orientation. Theory includes the gross bedform normal transport model (GBNT), in which dunes in unlimited sand availability orient normal to the direction of maximum gross transport, or the ‘fingering mode’ of Courrech du Pont et al. (2014), in which dunes align with the direction of resultant transport, R, in limited sand availability. A good match between observed and predicted orientations suggests the theory is sound and the simulated wind field realistic. Conversely, a poor match suggests either the simulated wind field is unrealistic or the theory lacking, and that the assumptions and parameters contained in one or both must be modified.

Aspects of the approach may be tested on Earth, where ground truth wind data are often available. We used (1) surface wind data to predict dune orientations in the Arabian Peninsula; and (2) uncalibrated surface winds predicted by a regional climate model (WRF) to predict dune orientations in the Namib Sand Sea. We then compared the observed orientations with those predicted using the forward modeling approach. (1) provides a direct test of dune formation theory, while (2) provides a test of the complete ‘blind’ forward modeling approach.

For (1) we predicted dune characteristics using 2000-2009 wind data for 20 stations in or near dune fields to calculate potential sand flux and thereby GBNT dune orientation and R. GBNT theory was a good predictor of crescentic dune orientation, but performed poorly for small and large linear dunes, which were well-predicted by R. This suggests the crescentic dunes formed in unlimited sand, whereas the linear dunes may have formed in areas with limited sand.

For (2) we used a year of WRF winds at 3km resolution. The match between observed and predicted orientations appears much better for GBNT theory, compared to R (though mismatches remain), which may reflect high sand availability. The next steps are to vary the assumed saltation threshold, and to use winds after calibrating WRF to match nearby observational wind data. 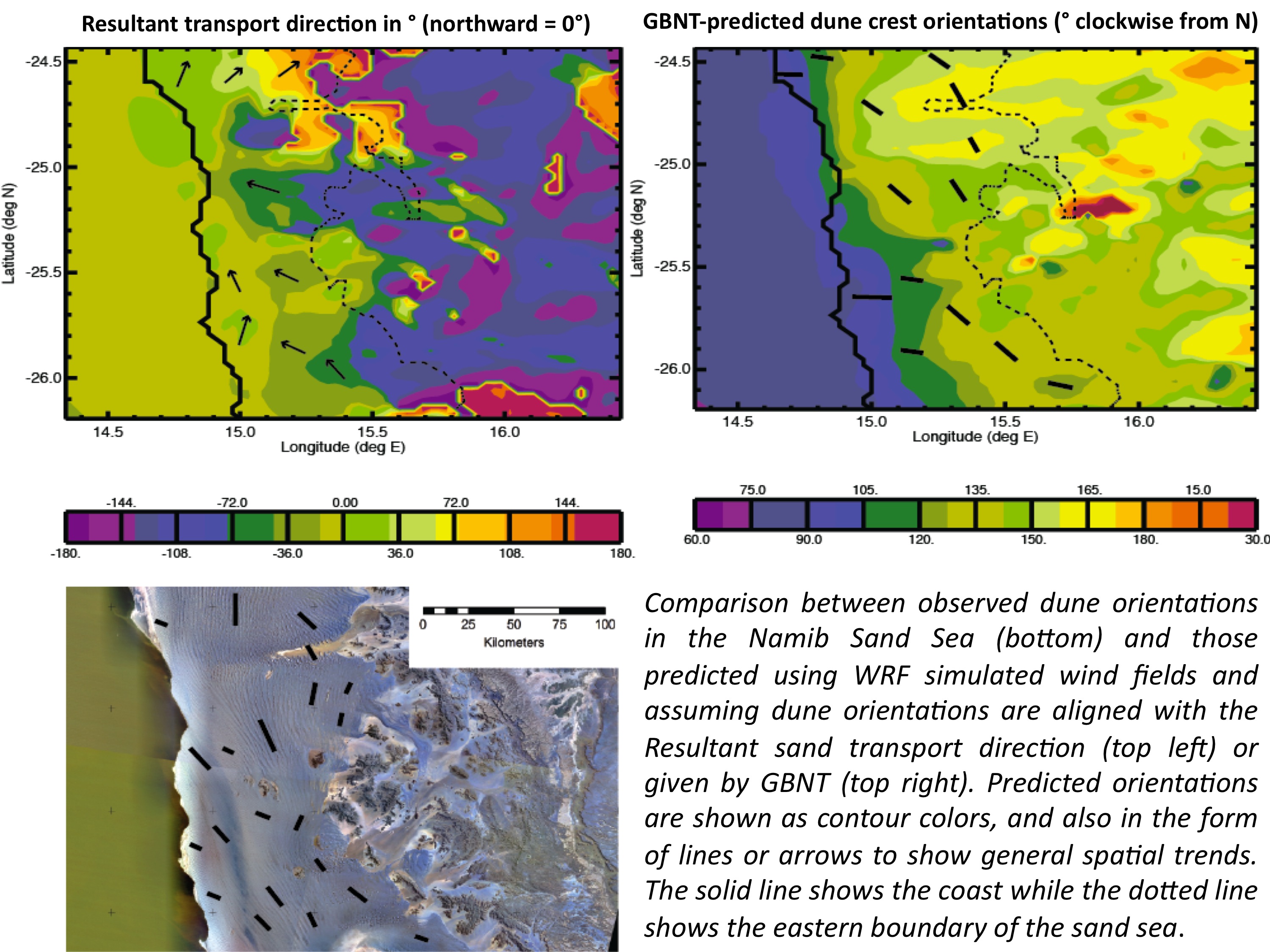