Direct-action avalanches occur during large storm cycles in mountainous regions, when stresses on the snowpack increase rapidly due to the load of new snow and outpace snow strengthening due to compaction. If temperatures rise above freezing during the storm and snowfall turns to rain, the near-surface snow undergoes rapid densification caused by the introduction of liquid water. This shock to the snowpack, if stability is near critical, can cause widespread immediate avalanching due to the large induced strain rates in the slab, followed by secondary delayed avalanches due to both the increased load as well as water percolation to the depth of a weak layer. We use the semi-empirical SNOow Slope Stability model (SNOSS) to estimate the evolution of stability prior to large avalanches during rain-on-snow events on Highway 21 north of Boise, Idaho. We have continuously monitored avalanche activity using arrays of infrasound sensors in the avalanche-prone section of HW21 near Stanley, in collaboration with the Idaho Transportation Department’s avalanche forecasting program. The autonomous infrasound avalanche monitoring system provides accurate timing of avalanche events, in addition to capturing avalanche dynamics during some major releases adjacent to the array. Due to the remote location and low winter traffic volume, the highway is typically closed for multiple days during major avalanche cycles. Many major avalanches typically release naturally and reach the road, but due the complex terrain and poor visibility, manual observations are often not possible until several days later. Since most avalanche programs typically use explosives on a regular basis to control slope stability, the infrasound record of avalanche activity we have recorded on HW21 provides a unique opportunity to study large naturally triggered avalanches. We use a first-order physically based stability model to estimate the importance of precipitation phase, amount, and rate during major rain-on-snow avalanche cycles. 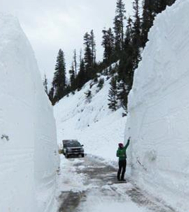