A major challenge to sample return is the transport to Mars of an adequate supply of fuel and oxidizer (the heavier component) for the return trip. A possible novel architecture would be for the Mars Ascent Vehicle (MAV) to share a platform with a device that would manufacture the oxidizer in situ. Far from fanciful, that hypothetical platform would look very much like the Mars 2020 rover. The Mars Oxygen In Situ Resource Utilization (ISRU) Experiment, MOXIE, will produce 22 g/hr oxygen from atmospheric carbon dioxide using solid oxide electrolysis (SOXE). With proper refrigeration, it could readily fill a MAV tank with high Isp LOx while waiting for rendezvous with a sample acquisition rover.

The immediate motivation for MOXIE, however, is as a prototype for a 100:1 scale unit that would serve the same function on an eventual human expedition. If optimistic plans for a crewed mission are realized, it may well carry the second, and far more bountiful, Mars sample return. To make 22 g/hr oxygen from the CO2 in the martian atmosphere, MOXIE must first collect and compress that CO2, while purging other atmospheric components (4-5 vol%) that would otherwise build up and choke the process. Two distinct technologies are under consideration for that function; a batch-process based on condensation by conventional cryocoolers, and an Advanced Technology Option mechanical compressor that would allow more efficient, continuous operation. The SOXE itself derives from solid oxide fuel cell (SOFC) technology, essentially running the fuel cell process in reverse by feeding in electricity and CO2 to produce O2and CO.

MOXIE development is supported by the NASA HEOMD and STMD offices. We are particularly grateful to support from JPL and MIT, as well as our partners Ceramatec and Creare, in the preparation of the MOXIE proposal. 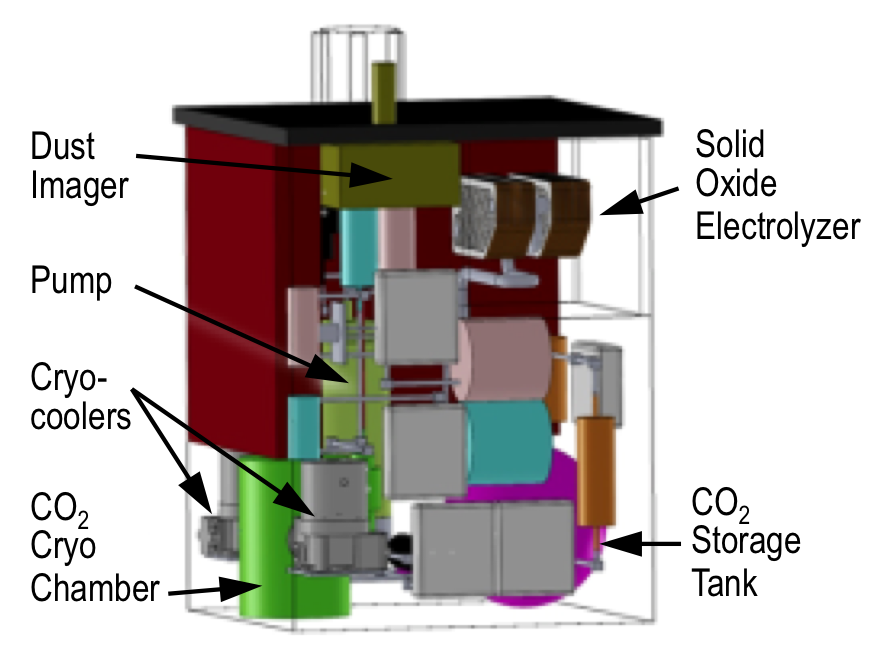