Politicians and ideologues blocking climate education through legislative manipulation. Free marketeers promoting the teaching of doubt and controversy to head off regulation. Education standards and curricula that skim over, omit, or misrepresent the causes, effects, risks and possible responses to climate change. Teachers who unknowingly foster confusion by presenting "both sides" of a phony scientific controversy. All of these contribute to dramatic differences in the quality and quantity of climate education received by U.S. students. Most U.S. adults and teens fail basic quizzes on energy and climate basics, in large part, because climate science has never been fully accepted as a vital component of a 21st-century science education. Often skipped or skimmed over, human contributions to climate change are sometimes taught as controversy or through debate, perpetuating a climate of confusion in many classrooms. This paper will review recent history of opposition to climate science education, and explore initial findings from a new survey of science teachers on whether, where and how climate change is being taught. It will highlight emerging effective pedagogical practices identified in McCaffrey's Climate Smart & Energy Wise, including the role of new initiatives such as the Next Generation Science Standards and Green Schools, and detail efforts of the Science League of America in countering denial and doubt so that educators can teach consistently and confidently about climate change. 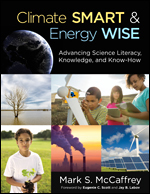