Vegetated filter strips (VFSs) have been recognized as an effective and environmentally-friendly beneficial management practice for preventing sediments from cropland to enter surface water. Their trapping efficiency depends on many parameters (characteristics of the filter, vegetation, flow and sediments) and may be balanced with other factors such as implementation, management and opportunity costs. The Vegetated Filter Dimensioning Model (VFDM) is a mathematical tool coupled with PHYSITEL and HYDROTEL that was successfully developed to determine the optimal dimensions and/or efficiency of vegetated filters with respect to vegetation characteristics, topographical and hydrological parameters.

The number of rills in a relatively homogeneous hydrological unit (RHHU, i.e. hillslope), the basic computational unit of VFDM, is a key parameter for the calculation of the surface runoff velocity, and therefore, the design of the vegetative filter. Until now, this parameter had been treated as a constant based on plan shape of each individual hillslope.

The main objective of this project was to develop an algorithm for determining a priori potential areas where rills could develop and implement the ensuing procedure in VFDM. With the proposed algorithm, the number of rills is determined by using physical and hydrological criteria. To study the influence of concentrated flow and diffuse flow in the filter dimensioning calculations, surface runoff is apportioned according to the way it reaches the primary stream network (concentrated, if through the aforementioned rills, or diffuse, otherwise, that is if discharging laterally). By considering actual land covers and identifying areas likely to generate sediments, results can lead to the building of hotspot maps that may be used as decision-making tools to guide the implementation of vegetated filter strips at the watershed scale.

The potential use of the algorithm was tested using data form a small (2.5 km2) agricultural watershed in Quebec (Canada) and a sensitivity analysis of the main outputs of VFDM, the width and efficiency of the filter strip, was performed with respect to key parameters (vegetation density, rill width among others). 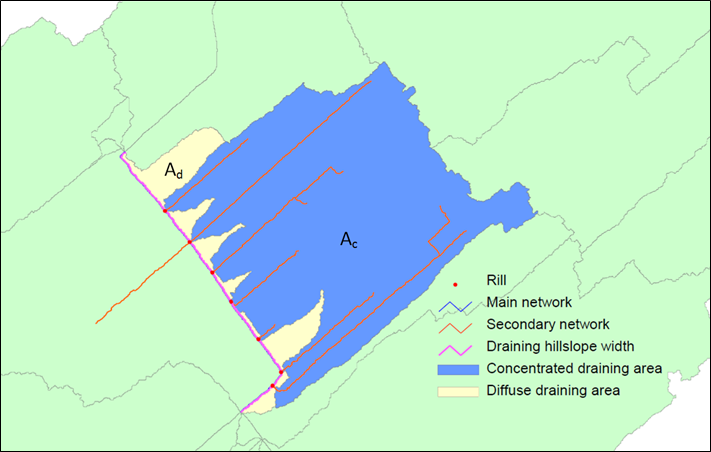