B11G-0130:
Early warning for global change-induced critical degradation of Amazonia: science and a blue-print for implementation from the AMAZALERT project

The Amazon is under threat through the joint effects of unsustainable regional development and climate change. Many studies in the past ten years have indicated that these can lead to deforestation, regional disturbance of temperatures and the water cycle, as well as loss of carbon stocks and biodiversity. In turn, these changes can lead to loss and dying of forests, droughts, low river levels and floods. If and when such degradation would occur, an Early Warning System (EWS) that would detect the imminent change would help to minimise its impacts. The EU-FP7 funded AMAZALERT project has investigated the likelihood and pathways of critical transitions in the Amazon and designed a blue-print for an EWS.

There is still much uncertainty on how robust the Amazon region is and how likely it is that it may collapse and ‘die-back’ within the foreseeable future. There is also uncertainty whether critical degradation would show any critical ‘tipping point’ behaviour, and whether such change would be associated with detectable early-warning signals, such as enhanced but slowing down variability in variables ahead of thresholds that are associated with the change. In the AMAZALERT project we performed a set of coherent climate, vegetation, hydrological, socio-economic and policy model evaluations to detect the sensitivities and potential critical change behaviour of the Amazon’s ecosystem services to climate and land-use change. We improved their parameterisation through field data analysis as well as through stakeholder interactions.

A framework was designed to enable early warning and to assess implementation issues. A hierarchy of warning levels can be distinguished ranging from policy failure though fatal regional forcing conditions, to actual impact on ecosystems and ecosystem services. For each level, different sets of indicators can be identified and different observational and analysis tools are required. Model simulations of both low and high complexity show conflicting evidence whether indicators will be able to detect early warning signals in time. Since much of any critical change would occur through changes in the hydrological cycle, river levels, rainfall and soil moisture appear among the most important candidates for monitoring, along with biomass, carbon exchange and energy budgets. 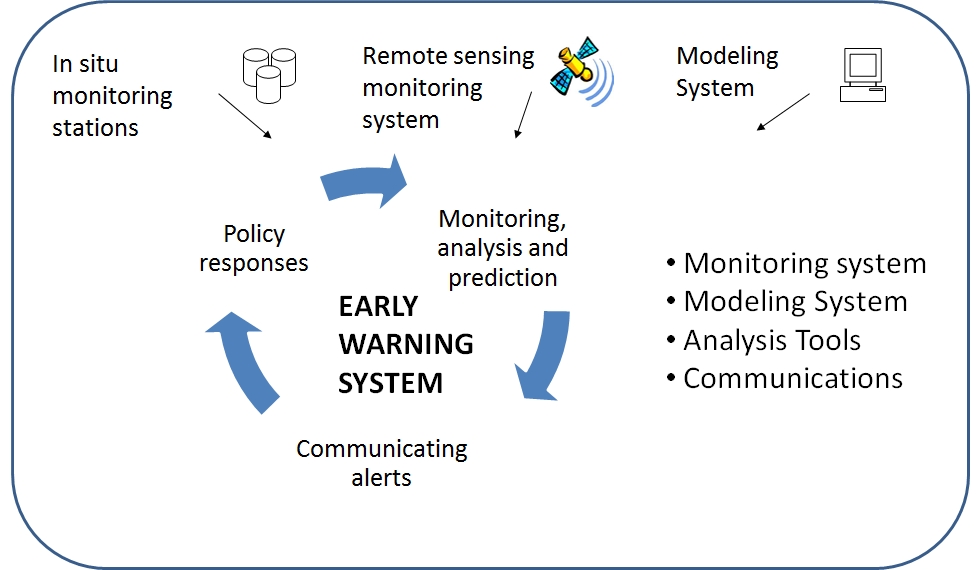