To understand deep soil carbon stabilization and change during reforestation we sampled bulk subsoils and individual redoximorphic features from a network of two meter deep soil pits along a gentle catena (3% slope) in the Southern Piedmont of North Carolina, USA. Until 1910, the catena was under cultivation. Since then, half of the soils we excavated have supported deeply rooted pine forests while the other half have continued to support relatively shallow rooted grasses and forbs. Across the catena, accordant with the divergent rooting regimes, subsoil roots were three times more abundant under forest than grass, and Δ14C in bulk subsoil samples was enriched by an average of 123‰ under forest relative to grass (p=0.0267).

Bulk subsoils, however, were extremely heterogeneous and contained three well-defined redoximorphic feature microsites. Over the lifetime of these upland soils, coupled carbon-iron cycling during transient oxygen limitation created the microsites and thereby imparted subsoils with steep biogeochemical gradients millimeters to centimeters apart. Concentration of operationally defined crystalline iron-oxyhydroxides was on average ten times higher in Fe-enriched microsites (30.1 ± 2.5 mg/g, mean ± 1 SE) than Fe-depleted microsites (2.9 ± 0.3 mg/g) and gley microsites (3.3 ± 0.4 mg/g) across the catena. Under the deeply rooted forest Δ14C in gley microsites and Fe-depleted microsites was enriched by an average of 73‰ (p=0.0194) and 94‰ (p=0.0416), respectively relative to the same microsites under grass. Meanwhile, Δ14C in Fe-enriched microsites was unchanged by the divergent rooting regimes (p=0.1936). These microsite dependent patterns of radiocarbon enrichment indicate that subsoil C stabilization during reforestation of the catena was spatially conditioned by historic coupled carbon-iron cycling. We detail the mechanisms of this conditioning, and argue that similar long-term biogeochemical processes influence contemporary subsoil C stabilization and change more often than is commonly appreciated. 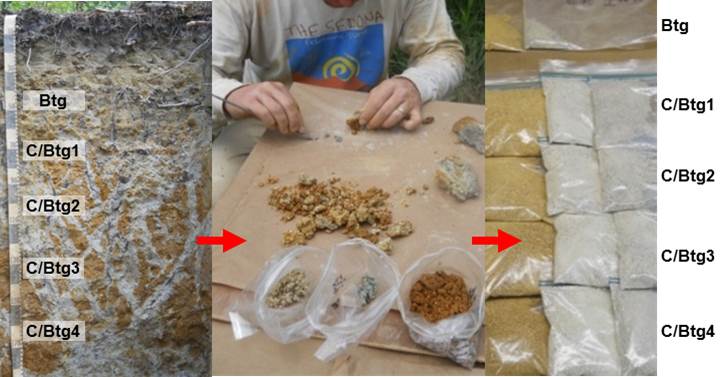