The National Weather Service (NWS) Office of Hydrologic Development (OHD) has developed a distributed hydrologic model which incorporates the concept of threshold frequency (TF). The TF represents flood flows for each grid translated to their equivalent flood frequency, or recurrence interval. It is intended to provide a more understandable representation of the criticality of the flows in terms that forecasters and the general public can better understand. The OHD has developed procedures for estimating the TF values which involve long term simulations of surface runoff using gridded precipitation data sets. This approach requires extensive data compilation and computer processing which can be difficult and time consuming.

This study addresses a quick way to derive the gridded TF estimates using the US Geological Survey (USGS) flood frequency estimation approach based on regional regression analysis of basin characteristics (Gotvald et al 2012). The USGS approach used generalized least squares regression to develop a set of equations for estimating flows with 50-, 20-, 10-, 4-, 2-, 1-, 0.5-, and 0.2-percent annual exceedance probabilities for ungaged basins in California. These equations for the North Coast region of California were applied to each grid of the RDHM model, each of which has a drainage area and mean annual precipitation value. Simulated flows for each grid output from the RDHM for a moderate flood event in December 2012 were then translated to the corresponding flow frequency to generate a time series of TF for the event. The approach applied is considered a feasible and efficient way to generate the TF values for any location where the USGS regression analyses have been developed. 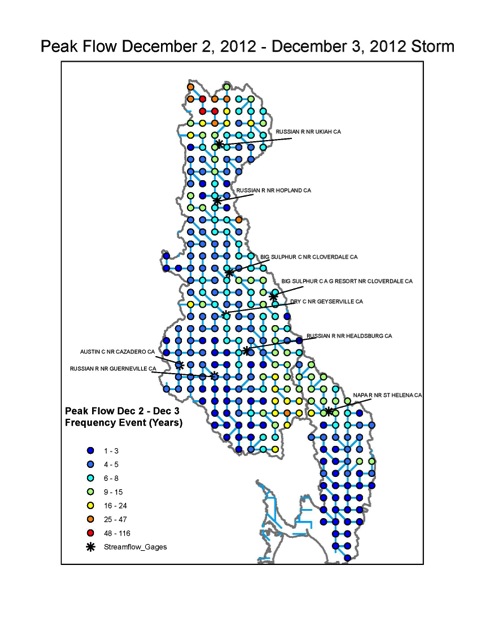