To maximize offshore wind energy generation it is critical to have a comprehensive understanding of all atmospheric and oceanic parameters that could affect any part of the wind turbine system; prime of which is ambient turbulence intensity (TI), a measure of the degree of fluctuations about the mean wind speed within the three dimensional wind field (σU, standard deviation of wind speed). A wealth of data from nine meteorological towers located between 7 and 111 kilometers offshore in the Irish and North Seas were used to investigate the dependencies of TI and σU on wind speed, height, wind direction (θ) and fetch. The average turbulence intensity at 50m ranged from 6.32% to 7.44%, with TI decreasing with distance from the coast until 40-50 kilometers after which TI interestingly began to increase. In fact, when examining TI as a function of wind direction, TI was largest in sectors with fetch greater than 100-200 km and smallest in land sectors. Additional factors that influenced the TI dependency on θ, especially in the sites with reduced fetch, were coastal orientation, inland topography and atmospheric stability.

Dissimilar to the relationships indicated in the IEC 61400-3 standards, σU is not linear, and TI not monotonically decreasing as a function of wind speed. Instead there is a height-dependent wind speed bin, between 8-14 m/s, where the transition from thermally- to mechanically-generated turbulence occurs. When comparing plots of σU and TI versus wind speed for all of the masts at various heights, it can be seen that there is near ubiquitous agreement between the masts. This implies that when averaging over all wind directions, these relationships are universal throughout Northern Europe.

The vertical profiles of σU and TI are highly susceptible to different wind regimes. At low wind speeds σU and TI are nearly uniform with height, likely a result of the well-mixed nature of thermally-driven turbulence. At high wind speeds a strong, nearly linear decrease with height is realized resulting from the air-sea interface that generates the mechanically-driven turbulence. Strong similarities exist in these vertical profiles and the TI versus θ plots between masts within similar geographic regions, indicating that throughout these regions similar turbulence characteristics can be expected. 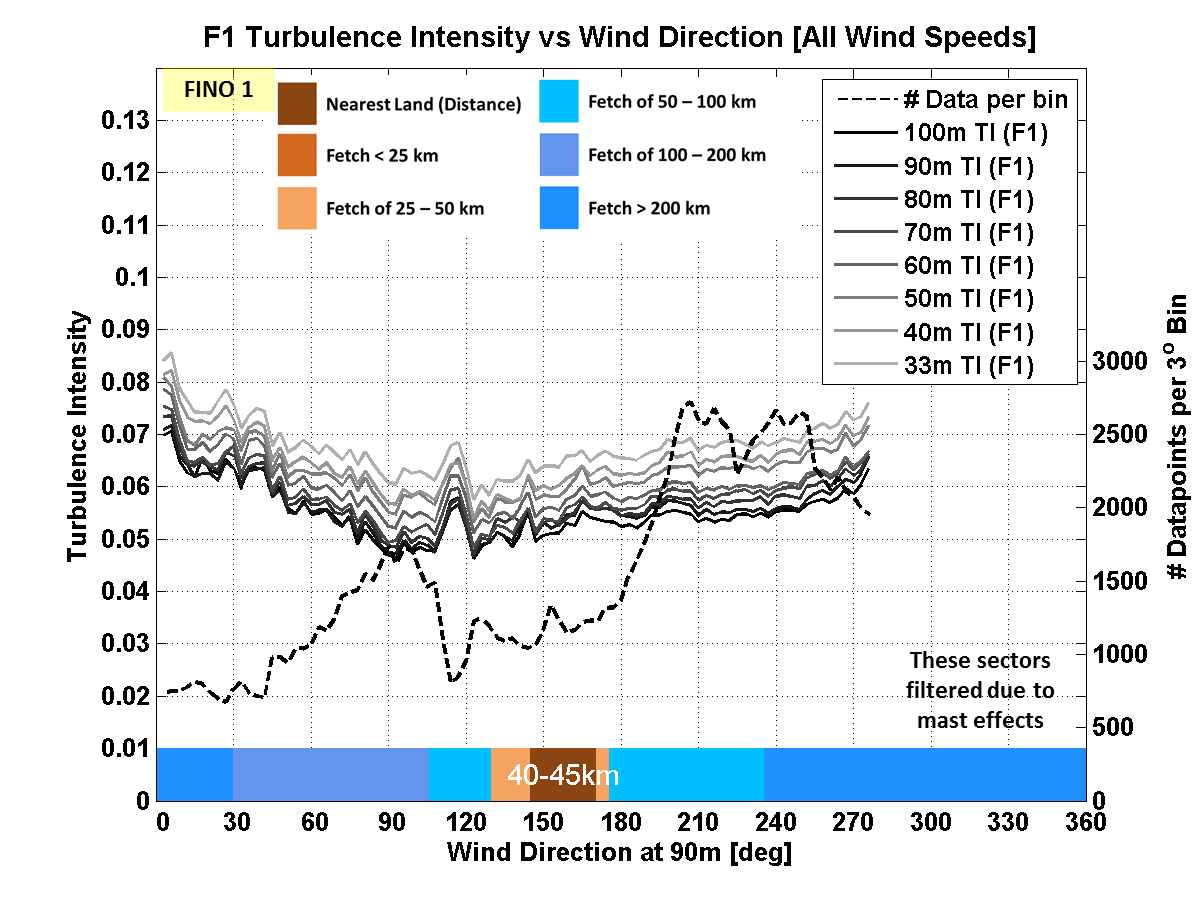