The present study is based on gravity core sediment samples from the Eastern Mediterranean Sea located in 32° 20’ 55” N and 31° 47’ 79” E, in front of the Nile Delta Fan taken during METEOR cruise M70b (October 2006). The core is gravity one (St#822), 4.5 m long, and in 1089 m water depth. The study of benthic and planktic foraminifera is used to determine the microhabitat of the bottom sediments during warm and cold periods. Sapropels S1, S3 and S4 are encountered in the studied gravity core sample from the eastern Mediterranean. The sapropel layers S1, S3 and S4 were deposited during interglacial periods, characterized by a low foraminiferal numbers, reflecting eutrophic conditions. Glacial periods are characterized by high foraminiferal numbers due probably to an enhanced glacial productivity. Sapropel layers are distinguished by increase of Fe, TOC% (TOC%≥ 1.2%) and decrease of Ca concentrations as a result of the Blue Nile suspended particulate matter discharge during summer monsoon. Clay content increases at the sapropel depths that indicate an increase in the terrigenous input derived from the weathering of Ethiopian basalts. Temporal distribution of planktic and benthic foraminifera in the Nile deep sea fan sediments besides geochemical charcterization, palaeohydrological fluctuations, palaeoenvironment and microhabitat of foraminifera were reconstructed for the last 100000 years including glacial and interglacial periods. Formation of the Sapropel layers are synchronized with the decreasing of δ18O which means that the Mediterranean Sea received high amount of fresh water from the Nile river discharge. Clay content, TOC%, Ca–Fe cycles, oxygen and carbon isotopes and planktic foraminifera document the pluvial and arid periods throughout the 100000 years and define clearly the contributions of terrigenous and TOC% in the sapropel layers. Infauna/epifauna ratio and benthic foraminifera assemblages were used to reconstruct the microhabitat of the sea bottom during sapropel and cold periods. 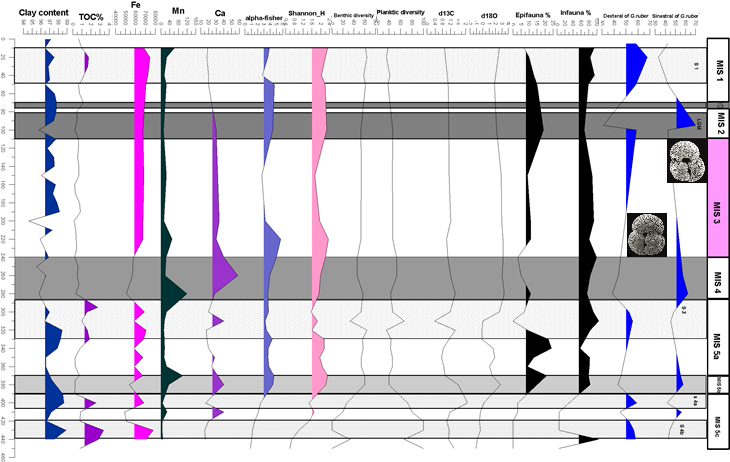