C43E-0450:
How does the representation of altitudinal variation of temperature in gridded forcing data affect modeled assessment of snow sensitivity to climate warming?

Modeling studies that simulate snowpack sensitivity to climate warming often represent the rate of temperature change with elevation as a parameter in the model. If not represented as a parameter, this rate is implicit in the gridded forcing data. Theory and observational evidence conclude that the relationship between temperature and elevation varies in space and time, yet models often represent this rate as a constant value. In this study, we test how seasonal variability in temperature lapse rates affects modeled sensitivity of the mountain snowpack to climate warming in the 870 km2 upper Deschutes River Basin, Oregon Cascades (USA). We calculate mean monthly temperature lapse rates using linear regression with all available measurements in the study region during the period 1989 – 2011. We then calculate lapse rates from the 1/16o gridded forcing dataset provided by Livneh et al. (2014) for the domain during the study period. These lapse rates show muted seasonal variability and are steeper than the observed lapse rates (r2 = 0.01). Using a simple bias correction algorithm, we scale the temperature and precipitation in the gridded data to the monthly average temperature and monthly total precipitation from PRISM. Lapse rates calculated from the bias corrected data match the seasonal variability and mean values of the observed lapse rates (r2 = 0.93). We then run a spatially distributed, snowpack energy balance model (SnowModel) with both datasets, prescribing the calculated lapse rates. We use a multi-response algorithm to identify optimal model parameters independently for each dataset and simulate snow accumulation and melt for the period 1989 – 2011. We then run simulations using perturbed forcing data (+2°C, +4°C and ±10% precipitation) to evaluate the potential impacts of a warmer, wetter/drier winter climate on snowpack accumulation and melt with both datasets. We quantify changes in the partitioning of solid and liquid precipitation, total snow-water-equivalent (SWE), SWE-melt, and water available for runoff for each dataset and each climate perturbation on monthly timescales. Our results indicate that the choice of lapse rates changes the conclusions about the elevational dependence of snowpack sensitivity, as well as seasonal shifts in the quantified metrics. 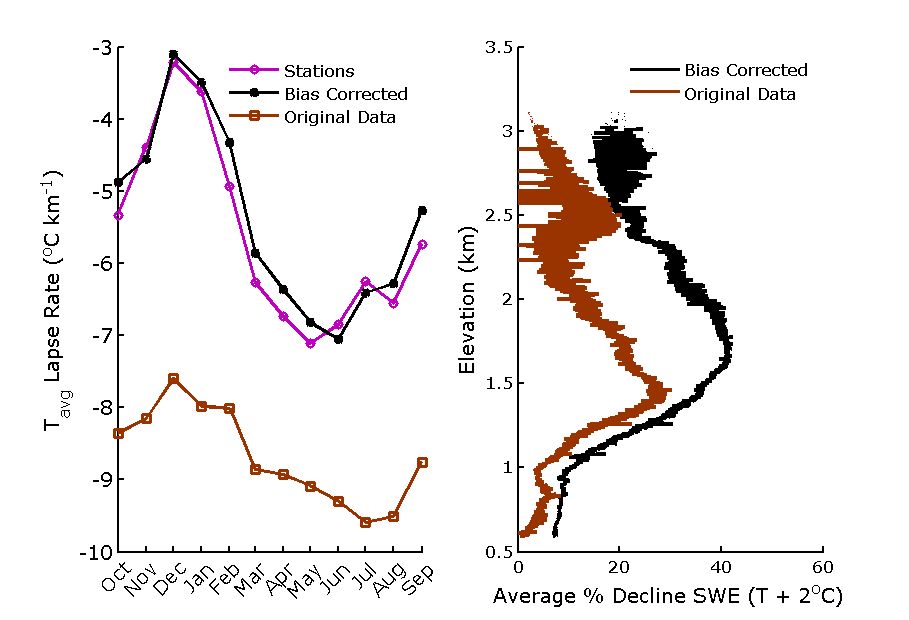